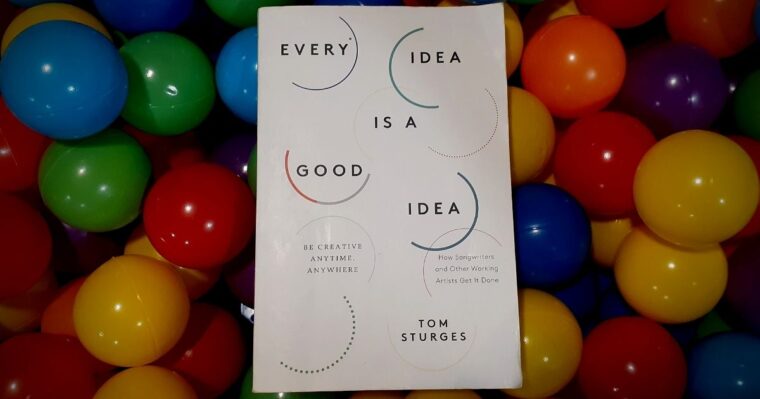 Every Idea is a Good Idea: Be Creative Anytime, Anywhere – How Songwriters and Other Working Artists Get It Done by Tom Sturges

“Creativity is a limitless function of your intelligence that allows you to see, hear, and imagine empty spaces filled with sounds or images that are no there, at least not yet, whether music, words, art, buildings, or anything else your mind can imagine, irrespective of the level of ability you may possess in a particular area.”

I love creating and I think it is something everyone should make time for. It might be impossible to come up with a truly novel idea but every idea can be a great idea, so says Tom Burges. He explores creativity in this book by looking at the example of songwriters and television producers.

One piece of advice he gives is “to be open to all creative input, to another point of view, [and] to the reaction of your audience.”

Asking questions is a great way to “inspire creativity, new thinking, and new thoughts.” All you have to do is “ask more questions about everything you do and anything you see. Learn more about things, and be in the habit of wondering how and why and who. Always ask one last question before a conversation ends.”

That is a great idea. Sometimes we are so worried about what it say next, we don’t truly listen and follow that up with a great question. Let’s try to make that a part of our daily practice.

Most of us know that “thoughts are ephemeral and fleeting things that alight like butterflies and disappear just as quickly if they do not find some recognition or refuge or happiness.” That is why I try to scribble down an idea whenever one appears.

Babyface takes a different approach, however. ‘He does not try to preserve every single idea he comes up with. He lets the idea stew. He is patient. . . So if Babyface wakes up the next morning and cannot recall an idea with ease, he believes it may not have been such a memorable idea after all and was probably not a hit song to begin with.”

Collaboration is also a great way to create. Sturges has a few pieces of advice for that realm as well. He writes, “if you are working with someone who is great at something, trust that greatness. Accept their gift and do no question it. Let it lead you. If you can, turn an honest eye on yourself, look to see what you are not great at, and find someone who is as great at your weakest link as you are at your strongest. Reveal to yourself what you will never accomplish and find someone who can accomplish it.”

He even suggests that you don’t share your creative process. He thinks pulling back the curtain can remove some of the mystery and that by keeping it private you “show that you respect it too much to talk about it behind its back.”

I also like this idea: “As a standard practice of your creativity, once an idea hits you, finish some version of it.” I’ve been making beats again and I have been making different sections and changes in the beat. I haven’t been formatting them into songs as I have been working, but since reading this book, I have seen the wisdom in this piece of advice.

“By finishing a first draft, this finalizes things in the mid, names the file in which it will reside, and completes the circle of thought. When you return to further develop the idea, hours or days or weeks later, you will find all of the basic components are outlined for you, left neat and tidy and ready for further attention.”

But that’s also why making different sections of the beat, intro, chorus, bridge, and a change-up are great ideas too. Then these sections will be available to me when I go back to finish the song with an emcee.

All creativity needs is a spark. And that spark can come from anywhere. Sturges uses the metaphor of wildfires to illustrate the concept.

“Many forest fires are started by lightning, more so than all of the other causes combined . . . When you have writer’s block, your neurons and synapses are just standing around, doing nothing for you. . . In order to get them back in action, smoking are burning, all you need is a bolt of lightning.

The lightning is someone else’s already existing idea.”

“Jeff ‘Skunk’ Baxter’s . . . little bit of lightning is an old Motown recording . . and then he plays along with it on his guitar, and asks his fellow musicians to join him. . . When the time was right, and the groove established, he shut off the Motown record and started his own groove, created his own beat, or wrote his own songs. There was a mist of Motown in the air, but he soon made the room and the session his own. . . The analogy he used to describe it was like someone in a glider being pulled up into the sky by another plane, though musically speaking it was a song being pulled up into the sky by another song.”

I did that a few times recently when making a beat and it was an interesting new way to create a song. It had me working in key signatures and tempos I might not have otherwise tried.

“If you can achieve these simple goals, the creativity that results will have a chance at greatness.

This is true regardless of who you are or what sort of creativity you are after.”

So, go out there, write one song, create something, and have fun!