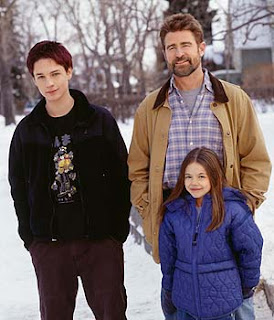 Everwood premièred on September 16, 2002 on the WB network. I remember it well.

I can remember seeing commercials for the pilot episode and thinking that it looked like a show worth watching. I also remember that the pilot was “extended” and ran for an hour and ten minutes.

There is no other show that I can remember in this detail. Most shows just don’t manage to grab me. Everwood did it right away. (Spoiler alert!)

The opening montage is just beautiful and poignant. Greg Berlanti is a brilliant writer who manages to hook the viewer right away.

We learn all about Andy Brown, a brilliant neurosurgeon who has the reputation of being one of the best doctors in the entire country. He is working late one night and neglects to go to his son’s piano recital. As he leaves the office, he is approached by two police officers who tell him that his wife has just been killed in a car accident.

Andy has two kids; an eight-year old daughter, Delia and a fifteen-year old son, Ephram. He up and moves the family to Everwood, Colorado for seemingly no reason. He starts up a family practice in this small town and tries to reconnect with his children.

Andy is played by Treat Williams. He is instantly likable and you really feel for this widower and out of touch dad.

Over the course of the series, Andy Brown develops as a character. He finally becomes the man that his wife wanted him to be when she was still alive. There is a really sad scene in the series finale as he stands at her grave and just talks to her.

The best thing about the finale was that it wrapped up every character’s story line. It tied story elements up from the very first episode, and it gave perfect closure to the series. The show was already on My Best TV Shows of All-Time list but after seeing the final episode, it topped the list.

I just watched the entire series again, all 98 episodes and it is as perfect as I remember. I can’t recommend this show enough. Season 1 is available on DVD and is well worth the price. Unfortunately, that was the only season commercially released. So go buy it, and download the rest.

(Update – Season 2 has just been released. Run out and buy that too!)