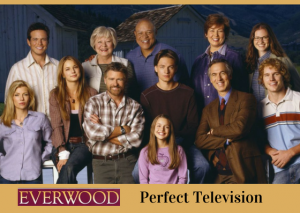 Everwood is perfect television and hands down one of the best programs of all time.

I recently finished watching the entire series again, this time with my wife who had never seen it before.

It was nice being able to watch it again with a fresh set of eyes. This was my fifth time making my way through the whole series. There are only two shows I have seen more times, My So-Called Life, and Star Trek, and while those are great shows, the completeness of this one makes it superior.

The four year story arc for this show is incredible. All the loose ends get tied up. Each and every main character’s story get resolved, and the closure feels great. I especially love the way the finale ties into the pilot. It’s not often that we get television that is able to tell a complete story like this.

It’s hard not to love Doctor Brown, either. His journey is heart-warming and heart-breaking. We get to see him grow into the man his wife always wanted him to be while she was still alive.

I am really surprised that this show is not available of Netflix. It deserves a wider audience. Most people I talk to have never heard of it and that is a shame. It was created by Greg Berlanti who is ruling television now with his roster of DC superhero shows. And speaking of superheroes, Star Lord of the Guardians of the Galaxy, Chris Pratt, is one of the stars of this show. Why isn’t this more of a classic?

Do yourself a favour and find a way to watch this. You won’t be disappointed.

Who Watches TV On A TV Any More?

Clash of the Titans