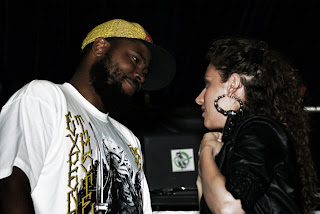 Say it ain’t so. Our time with Eternia is nearly up. Don’t fret boys and girls, you can download the interview for free so you can listen to it whenever you want. We had a great discussion and played some amazing music as well. So without further ado, let’s conclude this interview transcript.

Chase: “Who are you listening to right now? If we raided your MP3 player or your car deck, what would we find?”
Eternia: “You would find a lot of 90’s R&B. Shout out to Shai, SWV, H-town, Jodeci, Aayliah, a lot of 90s R&B, and a lot of 90s dancehall. I listen to TOK and I used to listen to a lot of Capleton and Buju. I’m just doing a trip down memory lane for me.
Newer cats, sometimes I try to not get my mind filled with other people’s music, not because it’s not good but because I don’t want it to affect mine. But I’m a Royce the 5’9’ fan. I’m checking for J Cole. Obviously Reef the Lost Cauze, I’ve always been a fan of. My peers too.
But it’s mostly non-hip-hop stuff. I really like Sia from 07. I really like Zacky Ibraheem. I’m really checking for my sister’s stuff, Jessica Kaia. She’s working with Tanika Charles, who you should be familiar with and if you’re not, you will be soon. She’s working with Rich Kidd, she’s working with Slackah the BeatChild. She’s working with Richie Hennessey. My sister is killing the game. She’s on my album.
So, yeah, a lot of stuff I’m listening to is not hip-hop and that’s not because I don’t love hip-hop. You know when it’s your business, especially when you’re recording. If you’re listening to a lot of someone when you’re recording, all of a sudden you start sounding like that person. So sometimes, I’m a little weird about what and how I listen to rap.”
Chase: “Your sister was on your first video wasn’t she?”
Eternia: “Not my first video but we have a music video together called ‘Love,’ big tune. Then she did a song ‘On Blast’ and I did a verse on that. And now she has a track on my album, she sings in the hook called ‘Played Out.’ So it’s an ongoing trend.”
Chase: “So is music in the family?”
Eternia: “Absolutely. You name a genre of music, we have someone actively doing it in my family. And I mean touring, making CDs. I have an industrial musician brother, Adversary. I have another brother in a band and they’re recording right now. It’s like classic rock or rock. I have a sister and another brother that play hand drums. My father was producing techno music, don’t ask. My mother plays classical piano. So everybody in my family, yes, definitely.”
Chase: “Who came out first? Did you come out first? Was it like a competition like, ‘Oh Eternia’s got a record out.’”
Eternia: “I think I probably started doing my craft professionally first, only because I was 15 and I was really young. But my mother and my father came before me.”
Chase: “It has been a pleasure talking with you.”
Eternia: “Thanks for stopping by my release party. We’re live at The Opera House right now and that’s, like, ridiculous. So thank you guys for coming for my ‘At Last’ record release party. DOPEfm, you guys have been holding me down for years. Shout out to Daddy J!”
Chase: “Yeah, we gotta get him to spin some of your cool tunes right now because you’ve got a lot of stuff we didn’t play in between the talking.”
Eternia: “And I’ve got new stuff. Don’t forget to run the new stuff. You gotta run the new stuff too. BBQ, It’s Funny, At Last, Day in the Life, they’re all out even before the album.”
Chase: “I saw those all leak but I didn’t download any of them because I want the album. I’m like an album kind of dude. I got the BBQ track because I wanted to spin that for this but I’m waiting for that album. I’m gonna be lining up Tuesday to pick it up for sure.”
Eternia: “I wish you could come to New York and cop it at Fat Beats but you’re going to have to go to Play De Record or wherever it is you go.”
Chase: “Alright, cool. This is awesome. Can’t wait to see you on stage in a few minutes and just tearing down the place.”
Eternia: “Definitely, thank you for having me.”
And that’s a wrap. Boo!
I so could’ve talked to her all night long. She was such an amazing person and I’m glad I finally got to meet her and conduct this interview. Her album with producer MoSS is now out, ‘At Last.’ Go buy a copy and don’t just download it on the sly. We should support good hip-hop and this album is definitely that. It’s been on heavy rotation since I bought my copy. It’s a great album.
Download this interview for free. I finished the show with a mixset featuring some new and old music from her as well including a few songs we talked about but never played. Check it out.
You can also check out all the interviews I’ve done by clicking on the “Artist Interview” tab at the top of this page. There is also a handy player in the sidebar for you to stream the interviews as well.
Remember that DOPEfm is live every Saturday night on 93.3 CFMU from the McMaster University campus in Hamilton, Ontario. And if you can’t receive our signal where you’re at, you can stream us at http://cfmu.msumcmaster.ca/ or check for our podcasts at http://dopefm.ca
A special thanks to Thom Payson of Total Productions for the great photography you have seen here all week. The above photo shows Eternia with fellow MC Reef The Lost Cauze.

All Black Everything with Solyd Roy and Del