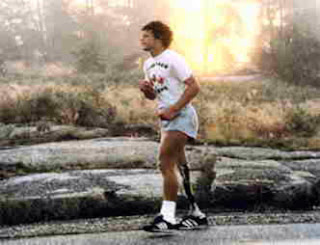 On Friday, here, I wrote about my favourite running star, Allyson Felix.

Today, I need to write about a running hero.

Terry Fox lost a leg to cancer and ran across the country to raise awareness and money for the cause. Since then Terry Fox runs have been a yearly event in cities all across Canada.

Almost every school has a Terry Fox run yearly. The run was this past Friday at my school and it was amazing.

All the students, teachers, and staff participated in it. Some of the teachers and staff manned water stations and check points along the route. Other staff members walked the route. I ran it.

The Grade 8 students left the school first and they all were running. I was amazed. I’d seen events at other schools and there were very few runners. The Grade 7 students left seconds later and they ran as well. The Grade 6’s and 5’s left and then it was my class’s turn. My class started running and did a pretty good job.

Some of the students quit running after a kilometre. They finished the course by walking it, which is fine. Not everyone is a runner. But there were enough runners there that it was a great event.

I stayed with the leaders for the first few kilometres and then decided to drop back. I turned around and found the second group of runners. I ran with them for a while and then caught back up to the leaders.

The running route had the students returning on the same road which they ran. So as I ran past students still making their way to the turn-around point, I would turn around and run with them for a moment. It was a great way to talk to the students and give them some encouragement. It also meant that I ran a lot longer than the planned route. All in all, I think I ran about eight kilometres that day.

We had gorgeous weather. The students put it an amazing effort and the whole community turned out to help. The police were there helping patrol the route. Parents and grandparents came out and walked the route as well.

It was a great day.

5 Comments on The Entire School Ran