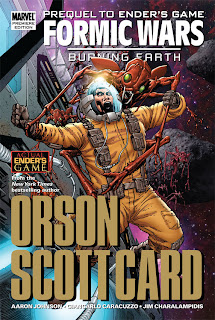 Orson Scott Card created one of the best science fiction series of all-time with the novel Ender’s Game. The first book was absolutely amazing and it was hard to believe that he could top the success of it, but he did. The second book in the series, Speaker for the Dead, is just as brilliant and my favourite tale in the series so far.

The latest edition to the Enderverse, as it is affectionately known, is a prequel to the original novel that started everything off. Surprisingly though, Card has not delivered this story to us in novel form. Instead, he has chosen to share this tale in comic book form.

Graphic novels are nothing new to Orson Scott Card. He has written Ultimate Iron Man: Volume One and Two. Several of his stories have been adapted to the comics medium as well, including Red Prophet and most of the Ender’s Game series of novels.

Now, for the first time ever, he is releasing an Ender’s Game story in comic book form. I really like comic books and think this was a good way to present his story to a new generation of fans. It’s hard to believe but this timeless science fiction series is almost thirty years old now.

The Formic Wars: Burning Earth starts with a group of space miners. They are harvesting minerals from asteroids quite some distance from Earth. When they notice a strange space craft moving at near impossible speeds, they discover that aliens are heading directly towards Earth. They are the first line of defence and the only ones who can give Earth a fair warning of what is coming.

The tale is incredible well done and has me wanting more. It’s nice to see that there is one character from the original novel in the series as well.

If you are interested in the series, I highly recommend you check out the audio books of the original series. They are done with full-cast narration, sound effects and music, and they really bring the story to life.

It’s nice to see Card working with different formats and mediums. I know that a feature film is also in the works. All I know is that he tells great stories and I am a huge fan on his work.

* Did you notice the pun I included in the title of this post?

I’ve done a lot of reading this year and I’m keeping track of every title on this blog. Next week I will post a complete list (which I will continue to update)