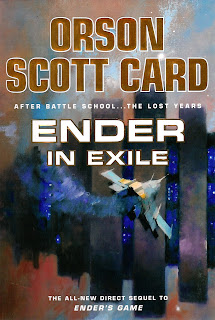 Ender’s Game is a science fiction classic and its sequel, which takes place some 3000 years later, is equally amazing.

The original books came out in the mid 1980s and sparked an entire series of novels. So far, there have been eight in total.

I found this hardcover of Ender in Exile in the discount section of the comic book store. I didn’t even know that there was a ninth book in the series, and one that takes place, chronologically, between the first and second books. I was so exited to see it.

Orson Scott Card is a very talented writer. I have read three books from the Enderverse, and two of his other original novels, as well as some of his work in the comics medium. In fact, the comics are currently telling an Ender’s Game prequel right now.

I absolutely love this series. I know that there are so many books out there vying for your attention and many of them are series as well. But I highly recommend this one.

Ender’s Game and Speaker for the Dead are two of the best books I’ve ever read. The latest novel, which bridges the two books together perfectly, is a nice edition to the saga. I really must get to work and start reading every book in the series. 5 more to go!

Students often say, “What’s the Point of All This?”