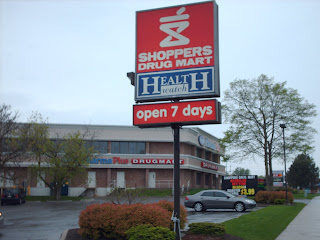 I drove past it the other day and turned into the small plaza. I went to the A&P to get a few groceries and then I walked over to the drug store.

At the check out, I tried to use my Optimum Points Card. The cashier asked if I had an Air Miles card instead. I asked if they had changed their reward card, and that’s when the cashier told me, “This isn’t a Shopper’s Drug Mart.”

I was taken aback. I was sure that this was a Shopper’s Drug Mart. I had seen the sign outside. Then the cashier told me that there was one right next door.

That’s strange I thought. How could two drug stores even survive right beside each other? And how come I didn’t see the other store? So I went back outside to look. I focused on the sign behind the large street sign. 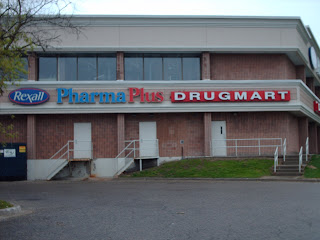 Right away, I noticed what was strange. PharmaPlus usually has a blue and orange sign like this one. 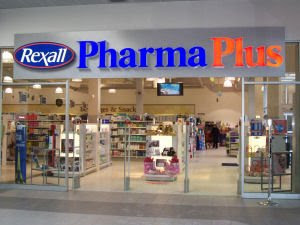 And they don’t usually refer to their stores as “Drug marts” That’s why I think it is strange that they have the word “DRUGMART” written in red and white so that it looks an awful lot like their competitors brand. 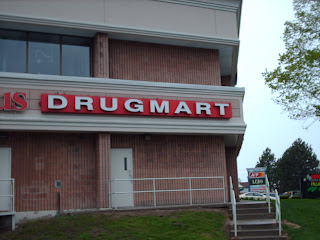 I think this is a blatant attempt to use someone else’s brand. This PharmaPlus location is obviously trying to draw Shopper’s Drug Mart customers into their store instead.

It’s probably very effective for them too because you can’t see the Shopper’s store from the plaza’s parking lot. The Shopper’s Drug Mart is in a standalone plaza next door. I looked at the plaza’s sign before I left to see if there was any further confusion. 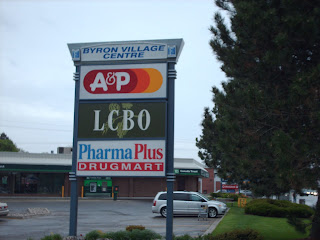 Nope. No confusion there. But this was the view from my car in the parking spot. 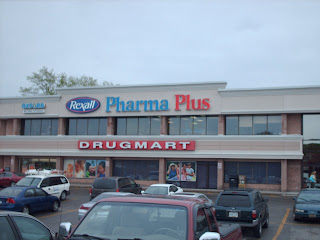 You can see that if you didn’t pay much attention and you didn’t look up, all you would really see is the red and white “DRUGMART” sign.

I think this is a cheap trick that this drug store chain pulled on me. I felt like a bit of an idiot at the checkout when I tried to use my Optimum Points Card. I bet the cashiers see this all the time. If they do, they probably think people are idiots. I’m not an idiot. I just wasn’t pay much attention. And with this photo blog entry, I think you can probably see how I feel for this rouse.

Putting Graffiti In Its Place