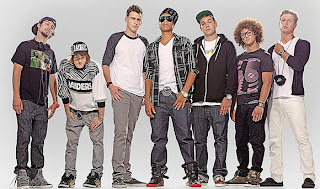 Last month, I had the honour and privilege to sit down with a few of the members of Down With Webster before they rocked the bandshell at the CNE.

This is the transcript of that interview. Hopefully you listened to it on DOPEfm this weekend, but just in case you missed the show, you can download the podcast of it for free, or listen to it with the player below.

Without further ado, here is the interview.

Chase: “Alright everybody this is Chase March and I am down with Down With Webster.”

Chase: “We’re at The CNE right now. What does the CNE mean to you guys?”

Cam: “I used to come down here a lot when I was a kid, just ride the rides, try to win the electric scooters, and ride the bike backwards. It’s cool. It’s definitely been part of my life for a long time, having grown up in Toronto.”

Pat: “I used to come, eat too many corndogs, get on the rides, get dizzy, and hopefully go home with a prize or two.”

Cam: “Yeah, it’s good times! And now we’re here rapping and signing in a bandshell. Still having fun at the CNE.”

Chase: “The CNE always, for me, signals the end of the summer. Once you hear the CNE is here, it’s like, ‘Uh-oh, the summer’s gone.’”

Cam: “It’s bitter sweet because the CNE’s here, that’s good, and the summer’s ending, which is bad. It’s still fun anyway, an excuse to party.”

Chase: “Down with Webster has been making a lot of noise lately. You’re all over the place, getting lots of radio play and lots of video play on Much Music. So how did you guys form? How did this all come about?”

Pat: “It dates back to junior high days. Me and Tyler, who is our bass / keyboard player, and Marty, who is the drummer, kind of started playing music together around early high school / junior high. Originally, it was for a talent show. A lot of it was just getting together after school and learning how to play our instruments together. Then we started writing songs and then people from around the neighbourhood-”

Cam: “Yeah, a neighbourhood friendships. That’s definitely how it started out.”

Pat: “Very organic. Yeah, we were just like, ‘Come over after school. Show us what you got. Let’s jam and come up with something. What was that thing you were playing the other day,’ that kind of thing. Eventually we started writing better and better songs and it became what it is now.”

Chase: “It seems to me like you came out of nowhere this year because I hadn’t heard of you prior to that. But you guys have been working together for a long time and building a nice, loyal following.”

Cam: “Here in Toronto, it’s the place where we built, where we grew up, so a lot of people here had already heard of us. We were building in this one market but now I’m sure everyone feels like we came up overnight. If you’re in the media like that it’s like, ‘They weren’t on TV and now all of a sudden they are.” So that’s really new and super cool. But as far as the live show and stuff, we’ve been at it forever.”

Chase: “So, you won a talent show that got you started and then you also won the Rogers Mobile / Universal Best Unsigned Act in 2008.”

Pat: “Yeah, that was really flattering.”

Cam: “That was really cool.”
Chase: “And now you’re on the Universal label with your EP Time To Win Vol. 1. It’s a 7-track EP but I understand you plan to release a second volume which is going to be another EP.”
Cam: “I think the original thought was instead of making a full-length, classic style record and touring it for two or three years, how people do. We didn’t really want to do that. We wanted to be able to release music more frequently. So, we put out the seven songs and then were planning on releasing another one. We are all for putting as many songs on as we can on each installment because it would be great to get a record out every year.
Constantly new stuff. You get to play new stuff. It’s always fun. We’re writing a lot. We record a lot too, so there’s a big volume of material we want to get out.”
Chase: “That’s cool because it seems that the way people consume music these days, I mean I’m an album head, I love albums, but there are a lot of casual listeners that are all for the singles.”
Cam: “People aren’t really buying albums anymore. It’s like, ‘Try and make an album, all of singles.’ Usually a single is just what people perceive to be your best song. So if you make a bunch of what you consider to be your best songs, you can’t lose.”
Chase: “Well, it’s interesting because even with the traditional album, people put out one or two singles and you’ve already got three or four off a seven track E.P. that are bumping and making lots of noise.”
Cam: “It’s going well which is awesome.”

Chase: “This is the latest single, ”Whoa is Me!” from Down With Webster. Check it out and come back tomorrow for Part 2 of the interview or go download the whole show right now. Peace!”

Keeping the MIX in MIXTAPES