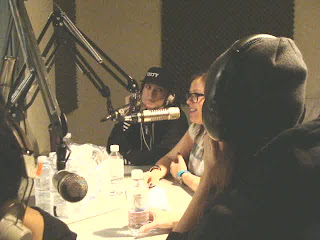 Chase: “All right, DOPEfm, we are celebrating International Women’s Day. This is Chase March on the microphone, Gamma Krush is hiding in the shadows, and Daddy J is on the boards.

We are lucky enough to have some lovely ladies in our studio today. We have Our Sis Sam representing the behind the scenes hip-hop promotion. And representing the microphone, we’ve got Lady A.S.G., Kool Krys, and we’ve got Nilla. Really nice to have you on the program.