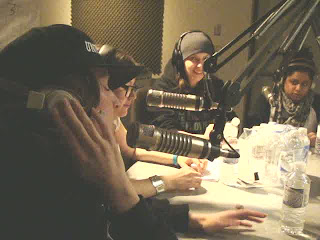 Welcome back to DOPEfm’s Women in Hip-Hop special roundtable discussion. You can download this podcast for free, stream it with the player below, read it from the very start, or just pick up right where we left off last time. . .

Nilla: “It’s just that straight disrespect. Do you respect your mom? Do you respect your sisters? Do your respect your girlfriend or your wife? Do respect women who are in your world? And if you don’t, then that is exactly how you are going to approach any women in any industry, whether you are the CEO of a company or whether you’re working at a radio station, no matter what, regardless of the hip-hop industry. I just think how you approach women is how you’re going to approach women in hip-hop.”

Chase: “I don’t know if I agree with that. I think there are a lot of MCs who treat their ladies nice but get on the mic and start saying ‘bitches ain’t shit’ and all that kind of stuff because there is an audience for it. I think we need to talk about that audience. I mean, as much as I don’t listen to that kind of stuff. Okay, I listen to some of it, but most of the stuff I listen to is conscious.

I listen to a lot of conscious hip-hop, a lot of underground stuff, I don’t listen to commercial rap, but even so, I hear derogatory terms all the time, like ‘bitches’ and ‘hoes’ and stuff like that. And then you hear defense of that from some rappers who say, ‘You know what? There are some bitches and hoes out there and I’m just keeping it real’ but that can’t be an excuse at all. We usually only get that one side, so how come you aren’t talking about the queens and the beautiful women. We don’t have that other side of the story, I find.”

Our Sis Sam: “I think the unity amongst our sisters is really important. We’re quick to tear down Nicki Minaj or anyone that is portraying women in a negative light that we don’t agree with. I think a better approach would be to say, ‘Clearly our sister is a little lost and she needs some sort of direction and be assured of who she is as a woman.’ And who better to guide her and nurture her to that than her fellow sisters. Rather than tear each other down, we should be more supportive and help each other and maybe share our knowledge because we see something that maybe they don’t see yet. And we have to have faith that maybe they will see the light one day.”

Download this podcast for free and come back tomorrow for Part 3 of the transcript.

Lissa Monet at The Stylus Awards 2011