Chase: “All right. We are back with Witness. If you missed Part 1 of this interview, you can go back and read it now. You can stream the entire thing with the player below, download it for free, or continue reading. Thanks for tuning in.

We are on the phone with Witness. A minute ago, we mentioned Rhymesayers. You’re not on Rhymesayers but you are based out of the same area, right?”
Witness: “Yeah. I moved to Minneapolis about three years ago. Before that I was in Philadelphia.” I’ve been doing everything independently since I started this when I was about 15. It’s not necessarily a total product of me saying screw another label.

These days a lot of rappers try to find their ways on to labels by a mainstream approach by sort of pitching themselves to a label. I’d rather just build stuff organically and end up either working with them on the same stage or by another means. So, it has its own benefits. It has its own drawbacks. It’s just like everything else.” 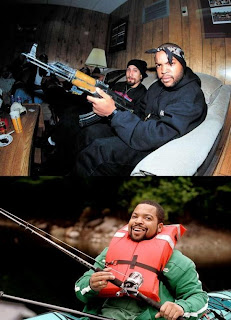 He’s got his full get-up, super-threatening picture and underneath it, there’s a picture of him from one of his movies where he’s got a life vest on and a fishing rod. You look at it and it’s kind of sad, but it’s kind of realistic too. People grow up. Hip-hop grows up.

I think that there is definitely a threat that as hip-hop gets older and a little bit more common that people will look at it as a safe thing. I think that is the most dangerous thing for it.
Personally, I started off writing mostly political stuff. Eventually I got so burned out being worried about politics that I shifted my focus.
I don’t think hip-hop should ever become something like what punk rock became. I don’t think it should be anything where its roots are lost.
It was people coming out and saying things that perhaps you’re parents don’t want you to be listening to, which does have a value to it because those things are real. There are definitely records out there where people are talking about stuff they’ve never done, but there are just as many records out there where guys are talking about things that legitimately happen.
So as an MC who doesn’t talk about a lot of that stuff, I still have a love for it. Those are the records I grew up on. There’s a lot of reality in those records. That is what is going to keep hip-hop alive, that broad range of material.
Like Odd Future. Some people might call it horrorcore, which it basically is. But, you still need people that are talking about the ugly things just as much as you need everyone else talking about all the beautiful things. The best MCs are the ones who are going to bring both to the plate.”
Chase: “On that note, let’s play ‘Beautiful’ by Masta Ace and then come back and talk some more with hip-hop producer and emcee Witness.”
Chase: “Remember to come back tomorrow to continue reading this transcript. If you don’t want to wait that long you can download the whole show right now or stream it with the player below. Thanks for tuning in.”

Amazing Beauty and Grace on the Ice

Nothing is Out of Bounds

5 Steps to Getting Supply Teaching Jobs