Doors Open London is one of the best weekends of the year. For two days every year, the city throws open its doors so you can see exactly what this city has to offer. You can explore historic sites, tourist attractions, and points of interest absolutely free of charge.

Last year, I got to nine sites. This year, I was able to get to 12. It was a lot of fun. Here are some the highlights. 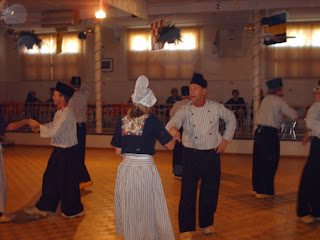 Traditional Dutch culture is alive and well at this site. I was impressed to see these dancers in their wooden clogs. They marched with precision and not only did it look great, it sounded cool as well. At the end of their half-hour performance, they invited us on the dance floor to try it out as well. It was a lot of fun!

It’s the 50th Anniversary of the club this year as well. The building was actually built and paid for by its own members. Interestingly enough, you don’t have to be from the Netherlands to join. 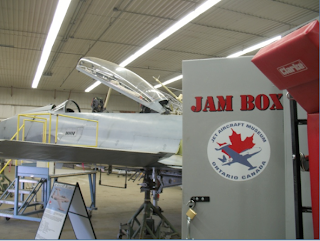 Here you can see aircraft being worked on and in the process of being restored to flight status. They had two CT133 T-Bird’s for up close viewing and they even let kids sit inside the cockpit. There was quite a line-up for that honour.

The JAM mission is to combine the creation and operation of museum housing: aircraft, historical artifacts, records and salient memorabilia, while simultaneously keeping representative historic aircraft in the air whenever and wherever major aviation events are held across Canada and at appropriate international centres.*

The Canadian Medical Hall of Fame 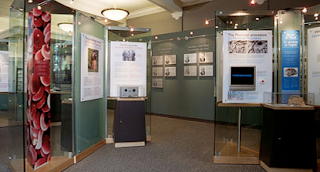 Lots of history here. It’s amazing to see how many scientific and medical breakthroughs happened right here in Canada.
Among the famous laureates housed in the Hall of Fame are: Sir Frederick Banting and Dr. Charles Best (discoverers of insulin), Dr. Roberta Bondar (first Canadian female in space) and the Honourable Tommy Douglas (the father of Medicare and CBC’s greatest Canadian)* 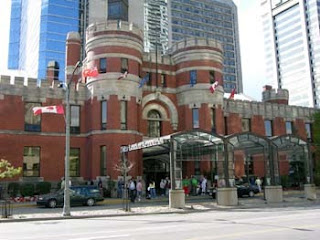 It’s amazing to see an old army hall and parade square transformed into a luxurious hotel. It think it’s great that the old building was not demolished and was instead transformed this way.

I went in the elevator and was really surprised to see that this building had twenty floors. From the outside, it simple looks like a two-story castle. Seamlessly built onto it though, is a skyscraper.

The elevator ride was stunning as there was a glass wall allowing for some great views. As I zoomed up, it seemed like I was blasted through the ceiling of the old armouries and hoisted into the air to get a nice glimpse of the downtown core. 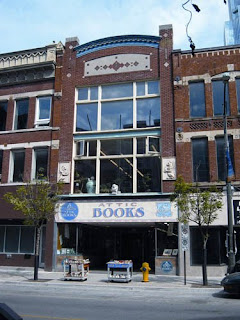 I’ve actually shopped here before. I love used book stores. I didn’t even realize that this store had historical significance. I thought it was just old. Silly me.

This three-storey red-brick commercial building, with arts-and-crafts facade and interior details, also boasts hardwood floors and dramatic tin ceilings. Built in 1875, it has hosted merchants and craftsmen for over a century. It is now Attic Books, a meeting place for local historians and a major source of local history publications, both new and used.* 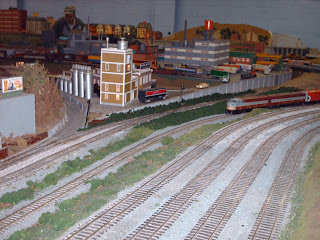 This scale model railroad was amazing. I have never seen such a huge set-up before in my life.

This is not like the toys we used to play with either. I learned that every single railroad spike, tie, and rail was laid by hand. That must have been a lot of work since the entire display is 40 by 100 feet. There is over 5000 feet of hand-built track too. Wow!

The model features steam and diesel engines pulling passenger trains, freight trains and coal drags. There are also three circus trains, scratch-built as the say, along with an operating Trolley Line and a narrow gauge mining RR. Three scratch-built operating lift bridges, each different, scale replicas of many London Buildings, some long gone, are preserved in O scale miniature including London’s C P R station. The layout requires at least 8 Engineer’s, conductor’s and Brake men, along with a dispatcher to operate!*

And much, much more.

There are 50 different sites on the bill, but no way you could possible visit each and every one. I zoomed from one site to the next all weekend long and only managed to fit 12 in. Even so, I had a great time.  Doors Open London is always an amazing event. Hopefully next year I will have a camera phone so I can live blog the whole thing. That would be cool.

Some Old Ruins in Ingersoll