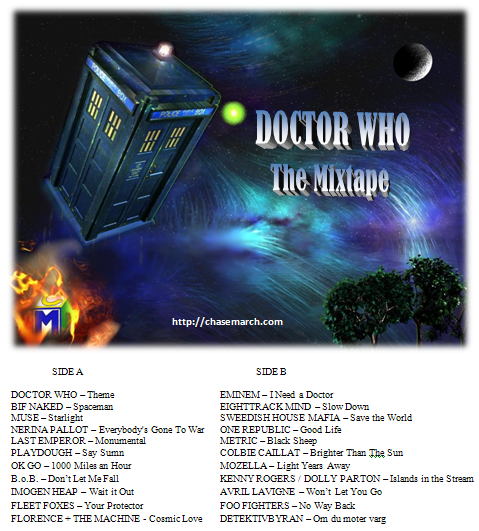 I was inspired to make this mixtape by a meme that was floating around on Tumblr. It was a 30 day challenge and Day 17 asked, “What songs would appear in your Doctor Who mixtape?”

I found this great blog post from Janine. She came up with a song for each of the major characters and justified her choices with song lyrics. The blog, Meanwher, elsewhen also offered some great suggestions for this hypothetical tape.

After reading those two posts, I was determined to make my own Doctor Who mix and to include some of their suggestions. I was unfamiliar with a lot of these songs prior to making the tape, but I got right to work, and was delighted with what I found.

I knew I had to start the tape with “Spaceman” from Bif Naked. If you’re a Doctor Who fan, you will see how perfectly that song ties into the very first episode of Series 5 when Amelia Pond first meets the Doctor.

Another highlight of the tape was including Kenny Rogers and Dolly Parton’s “Islands in the Stream.” It made me think of the time stream, the relationship the Doctor has with his companions, or even the one the Doctor has with the TARDIS. I know it sounds complicated, but give the tape a listen and I’m sure you’ll get it.

I included sound effects from the show and even an audio clip from an episode. The songs are blended together and you will never hear a song fade out. I’m doing my best to preserve the art of the mixtape. That is why I’ve divided it into two-sides because I really miss cassette tapes and how each side of a tape can have its own identity and flavour.

The Doctor Who Mixtape will fit on one CD, so download it for free, burn it to disc, save it to your iPod or MP3 player, and turn up the jams. You can also stream it with the player below.

Or you can download the mixtape in album format.

Please leave a comment and let me know what you think about it. And if you enjoyed this mixtape based upon a television show. You might like to check out the other one I made last year, “The Lost Mixtape”

Spread the music, and enjoy!