So, the new season of Doctor Who starts today but I won’t be watching it.

Instead, I will be waiting to see in on the big screen on Monday! 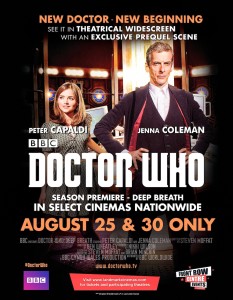 I saw the 50th Anniversary special at the theatre and it was a magical experience. I can’t wait to watch the start of the 12th Doctor’s reign in a theatre of super-fans like myself.

I already bought my ticket. If you haven’t done so and would like to see it, go to Cineplex now to order yours.

Let’s Make This a Tradition

I think they should do this every two weeks. I would pay to watch two episodes on the big screen with an energetic and excited crowd all season long.  It doesn’t have to be a big event for this to happen. Let’s make it a regular thing.

And with two episodes being shown at a time, even if they aren’t related, it is a feature-length event.

I hope to see you on Monday!

The Seventh Doctor and Ace Still Travelling in Comics

Who Will Be the New Doctor?

The Console for My TARDIS