The last weekend of summer was absolutely amazing. I went to Fan Expo, the biggest weekend of the year for comic book and science fiction fans, and was so excited about all of the Doctor Who happenings. 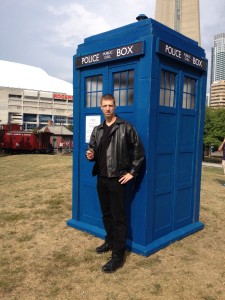 I arrived in style and parked my TARDIS right outside of The Metro Toronto Convention Centre.

I was very happy with how my costume turned out. Several people recognized me as the 9th Doctor. It was awesome! 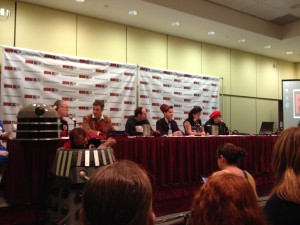 First up, I went to the panel on making Doctor Who props and costumes. 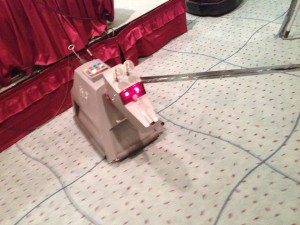 One of the panelists even made a fully-functioning K-9. He could control its movements and sounds via remote control. It was very cool! 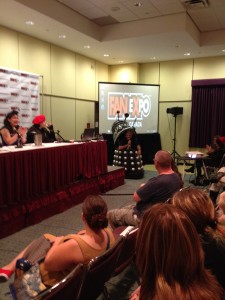 The Daleks even spoke about how they created their very intricate and detailed working models. They were definitely a hit as they zoomed around the convention centre. 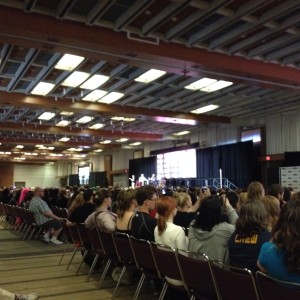 We had to wait in line for quite some time to get these seats off to the side and a little ways back. 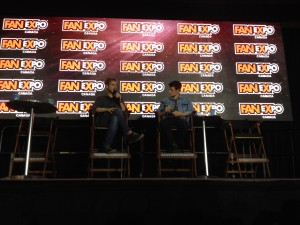 Two moderators went through the audience with microphones to field questions for the actors. They were very entertaining.

An audience member asked them to sing and not only did they do it, but everyone in the crowd started clapping along. After that, a young fan mentioned that it was her birthday and at Matt Smith’s beckoning we all sang “Happy Birthday” to her.

It was a magical day and I am glad that I got to see The Doctor and his companion. It was really cool to interact with a bunch of like-minded fans too.