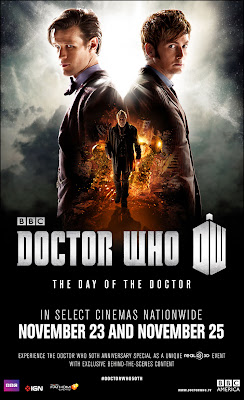 I am so excited! Today, I get to see the 50th Anniversary episode of Doctor Who. And I will be doing so in a movie theatre full of like-minded fans.

The last time something like this happened, was the series finale of Star Trek: The Next Generation. There was a special screening of it at Toronto’s Skydome.

Yes, I was there. The energy was incredible and we made history. I don’t think that a television episode had ever been aired in a stadium before. It was like being at a championship game. We were so loud and enthusiastic. It was such a great night!

Tonight, is equally exciting. I am really looking forward to seeing David Tennant reprise his role as The Doctor. Of the 13 actors to ever don the role, he is by far my favourite.

Hopefully, I will see you at the cinema for another groundbreaking television event.

This is going to be epic!

A Sad Picture Story (Update of my Life)