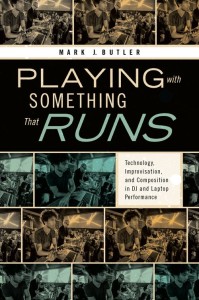 Playing With Something That Runs by Mark J. Butler

This book focuses on DJ and laptop performers in the EDM (electronic dance music) realm. I thought it was worth exploring even though that isn’t really my genre of music. I was sure there would be tie-ins to hip-hop and what I do as a DJ. I was right.

Recorded Music is Its Own Thing

Hip-hop music spread and became popular due to recordings (singles and albums.) They sounded different from the live performances too. The author talks about this in relation to rock music.

“rock spread and became popular through recordings . . . [and] is essentially dependent on recording technology for its inception and dissemination . . . rock embraces a host of performance styles, but most have some basis in African American popular music, are rooted in song, and paradigmatically exist as recorded music.”

Hip-hop started with deejays taking breaks from existing sound recordings and extending them. When hip-hop started to get recorded, it wasn’t simply a live performance being recorded. It became its own thing.

“recordings have conventionally been understood as ‘snapshots of live performances’ [but] records were conceived of as goals rather than by-products of artistic endeavors.”

Butler explains it this way, “this combination of texts produced something that did not exist in material form.”

The deejay present songs in a way to make the set something exciting and new. The mix is what is important, not just the individual songs. The whole becomes greater than the sum of its parts.

“The works contained in the recordings that constitute a DJ set are rarely presented in their entirety; instead, they are truncated, altered, and combined with other works. The borders and seams of the original work dissolve; it no longer functions as a unitary, bounded entity. The stability, fixity, or permanence that is classically associated with the work slips away, and any authorial value that might have been accrued with the work is seriously weakened. At the same time, aspects of the original work’s essence remain, and its former identity is not irrelevant. These ontic elements, however, become part of new, larger entities – the third record, and ultimately the set.”

The Power of Recognition

When deejays play a snippet of something that the audience can recognize, it energizes the crowd and makes the set memorable.

The sample, which presents a brief chunk of material – often recognizable – from a preexisting recording .. . is “performance quotation” because of the highly specific way in which they point back to the unique ‘aura’ of the original recording.”

Timing is essential for deejays. We have to take the record as it spins and mold it or form it so that it meshes with the song before it and the song that comes next. This is a constraint that helps foster creativity in the DJ set. I love how improvisational all of this is. But improvisation takes practice and experience. It’s a challenge that I enjoy trying to overcome every time I get behind the turntables.

I enjoyed reading this book and learned a thing or two about my craft. I have more notes too that I’d love to share. Stay tuned for a follow-up post soon!

Know Your History 14 – Comedy in Hip-Hop