London, Ontario, Canada is the place to be this weekend for some great hip-hop performed live. I will be DJing both of these events as well. I hope to see you out to at least one of them. Let’s support the local scene and artists. 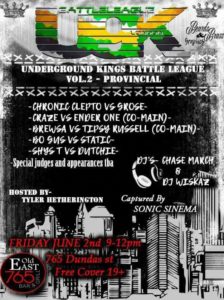 The premiere rap battle league hosts its second event today, Friday June 2, 2017, with live performances, several battles, special guests, two main events, and live deejays. The battles will be professionally filmed as well. The first event was spectacular and this second one will be even better. We have a new venue perfect for this style of competition.

Also on the Card

DJs for the Night 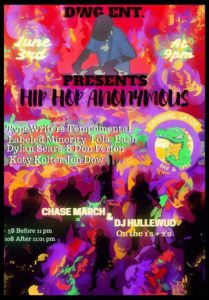 Hip-Hop Anonymous is back. Bigger and better than ever. We have a new venue for this monthly hip-hop showcase that is more conductive for a rap show. We have some great talent on the bill including a local favourites Typewriters, Tempomental, and Labeled Minority.

DJs for the Night

Hullewud has his radio show from 10:00 – midnight but he will make an appearance after that.

It’s going to be a great night!

I’m really looking forward to these events. I  hope to see you at both of these shows. Support local hip-hop and the artists. We really appreciate it.