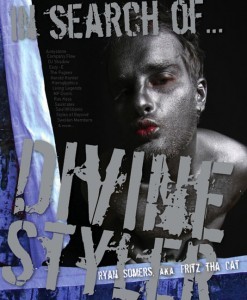 In Search Of . . . Divine Styler by Ryan Somers aka Fritz the Cat

Before the Internet made it possible to easily publish and distribute content, and before the popularity of blogs and social media, there were independent, do-it-yourself publications known as zines.

Zines were a labour of love for would-be journalists who simply wanted to share their passion with the world. Fritz the Cat was one of the best to ever do it.

His humble photocopied mini-magazine travelled far and made a lot of noise. It got reviewed and mentioned in mainstream magazines, song lyrics, and radio interviews. Now the story is being told in a book that features some of the content from the zine as well as commentary and special features.

It’s obvious that Fritz the Cat is a underground hip-hop aficionado. He managed to get exclusive interviews with Ras Kass, Abstract Rude, MF Doom, Aceyalone before many mainstream publications did so.

He even fulfilled his mission to bring Divine Styler back to the hip-hop realm. Maybe that was all due to the magazine and its huge influence. Perhaps things were already in motion for that to happen. The cool thing is that Divine Styler himself discovered the magazine and Fritz the Cat was able to meet him and get a guest article in this book.

I also like the fact that Fritz the Cat was a big proponent of the local hip-hop scene. It was before my time in London, Ontario, but the scene is still strong today thanks to the foundation he helped lay.

This book is a nice trip back in time to the mid to late 1990s featuring artwork, original zine pages and covers, and commentary about the entire journey.