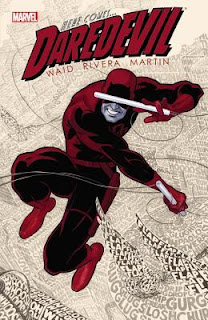 This is the start of the third volume of the on-going Daredevil monthly comic. It started its production in  April 2011 and I bought the first edition of comic but have held off with buying more. I was waiting for the collected hardcover edition.

I don’t like reading single issue comics anymore. I much prefer having the stories all together in one volume. And it’s nice to add to my growing Daredevil collection with a brand new take on the series.

This book doesn’t reboot the character either. It keeps the chronology of what happened in Volume 2 and the Shadowland story-arc. Yet, the tone is a little bit lighter, which is nice to see.

There is one book that you should read before this one if you’ve been following Daredevil since its 1998 debut in the second volume of the comic. 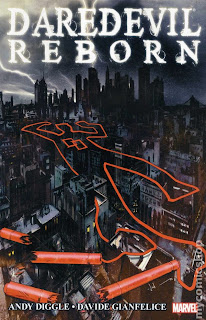 This is a great start to the Daredevil reboot and a fantastic read.

Matthew Murdock is trying to avoid his destiny as a superhero. He is wandering around the country and trying to keep a low profile, hoping to find something new.

It reminds me a bit of the live-action Incredible Hulk television series. And just like an episode of that show, trouble manages to catch up with our reluctant hero. He then accepts his destiny and heads back home to don the mantel of Daredevil once more. As such, it is a great prequel to the new series. I absolutely loved this story.

Wait for Your Tom Hanks