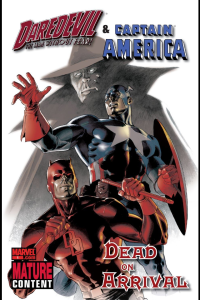 This one-off story was originally published in Italy and has never been presented to North American audiences until now. 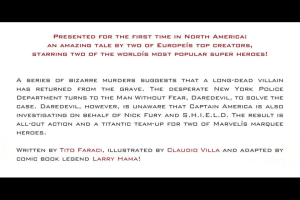 The villain in this one is Death Stalker, who first appeared in Frank Miller’s legendary run on the Daredevil title. The story was translated into English for this edition but it seems to work just fine. It’s standard super-hero team-up fair but a nice read nonetheless. 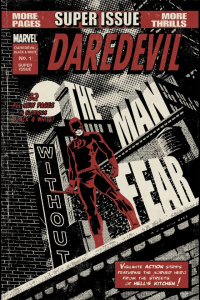 Matt Murdock was blinded as a young boy. The rest of his senses became so acute that he can function perfectly fine without sight. He has a radar sense that basically allows him to see in 360 degrees. He uses these powers for good and fights crime as Daredevil.

So, when given the chance to actually see with real eyes again, will it change his life for the better, or is it better to remain as he is. It’s a tough decision considering that Bullseye is back in town and a gang war seems to be wreaking havoc in the city as well.

This one-shot title is in black and white and tells a great story!

Carlos LaMuerto is the Black Tarantula and he has gone through a lot in his lifetime. He is trying to do the right thing by fighting crime with the powers that have been en-gifted to him. His cousin tries to steal this power. Daredevil helps foil the plans but doesn’t like Tarantula’s methods that often go a tad overboard.

I didn’t know much about this character but did enjoy this short tale featuring my favourite super-hero, Daredevil. 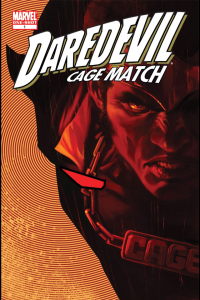 This is an origin story of the relationship between Luke Cage and Daredevil. Typical guys who are not above knocking each other around to prove something to themselves and one another. 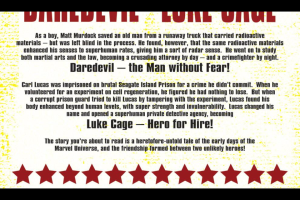 I don’t often seek out these one-offs to read but couldn’t help myself since I had the Marvel Unlimited App on my phone for a trial subscription. I really enjoyed reading all of the comics I have been posting about for the past two months. This app is a great tool to have. It’s so nice being able to carry around digital comic books that live in my phone. I can read whenever I get a spare moment. It’s awesome!

Reading Library Books on a Phone

Surf Through Life (A Guide for Kids)

Superhero Novels (For Eyes and Ears)