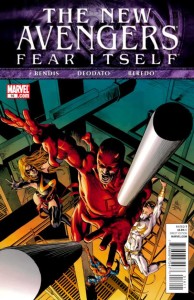 Daredevil joined The New Avengers in issue number 16 of the ongoing series and made a spectacular debut. He stayed on the team right up to the very end of the series as well.

His debut was brilliant. The single issue revolved completely around my all-time favoruite super-hero. It was very well done. I highly recommend reading that first appearance.

I started reading the series with this issue and was pleasantly surprised to see that it pretty much revolved around the heroes of Hell’s Kitchen. If you are a fan of the Netflix universe, you will really enjoy this read.

Luge Cage is the leader of the team and his wife, Jessica Jones, doesn’t want to bring up their child in this environment. He tries his best to balance super-hero life with his home life.

This was the second volume of The New Avengers title. Daredevil was part of the team in the first volume as well, but he was really only featured in a handful of issues then.

I enjoyed reading the series and seeing Daredevil being part of The Avengers. I think I might need to read the first volume of the series now too.