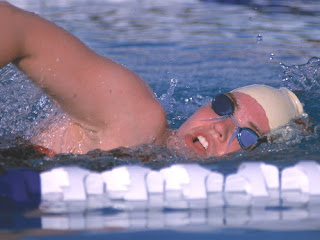 Darda Sales has competed in the last three Olympic games. She helped to bring home a Gold Medal for Canada in the Sydney 2000 Summer Paralympics. Her relay team also broke a World Record in the 4 x 100m medley at the games. She was back at the 2004 games in Athens and captured a silver medal there. She was also representing Canada at Beijing.

Sales is a very versatile swimmer and seems completely at home in the pool. She swims in a variety of events and doesn’t have a preference for any one particular stroke.

Darda was inspired when she met some swimmers who were training to go to Paralympic Games in Barcelona. A year later, Sales began swimming competitively. She was only ten years old at the time and she has never looked back.

She was grateful for the celebration that the city of London threw last week. “It gives us an opportunity to give back as well, it gives people something to strive for. That’s always important, bringing up the next generation to take our spots some day.”

She really was inspiring to meet. I love how she actually gives back to the community even in the midst of her still pursuing her goals. She loves the support they have shown her. She wants to return that support in any way that she can. She talked with fans and signed autographs after the event as well.

When she accepted the honour the city gave her, she was asked about her training schedule. She painted a picture for us that sounded like the sessions were long and tiring. It was quite humourous to hear her story. I encourage you to to listen to the first part of the combined show to hear it. The single interview I did with her afterwards, references that speech as well.

I asked her about her training and this is what she had to say, “I love to train. I’m one of those crazy people who loves the pain, loves to push myself. And so I really miss that part when I’m out of the pool. Hopefully, this won’t be too long of an injury but we’ll wait and see.”

When I congratulated Darda on all her success, she was quick to point out that it was a team effort, “I’ve had the privilege to represent Canada on those two relay teams. We’ve got some fantastic swimmers in Canada so it was really great to work with those girls and to bring home some medals.”

Darda can’t wait to get back into the pool and start training again. I’m hope that she will get over her injury soon. I know that there isn’t much that will actually keep her out of the pool. I’m sure we will see her at the next games in London, and I, for one, will be cheering her on for sure.

You can download the interview I did with Darda Sales before writing this story or you can stream it with the player below.