D-sisive is a familiar name to most Canadian hip-hop enthusiasts. In 1995, he started to garner a lot of attention for his witty punchlines and ferocious skill on the mic. He’s dropped some pretty classic jams over the years starting with his debut EP, J.A.C. back in 1997.

In 2000, he was featured on the Dim Sum compilation album by DJ Serious. Shortly after that album dropped, I had a chance to interview him for the university newspaper.

Last month, I caught up with him again and this time we did a radio interview for DOPEfm. I showed him the university article and he thought it was hilarious. He certainly has changed a lot in the past ten years. So much so that I didn’t think it was appropriate to share this old article with you. However, D-sisive told me to post it up, so here it is. 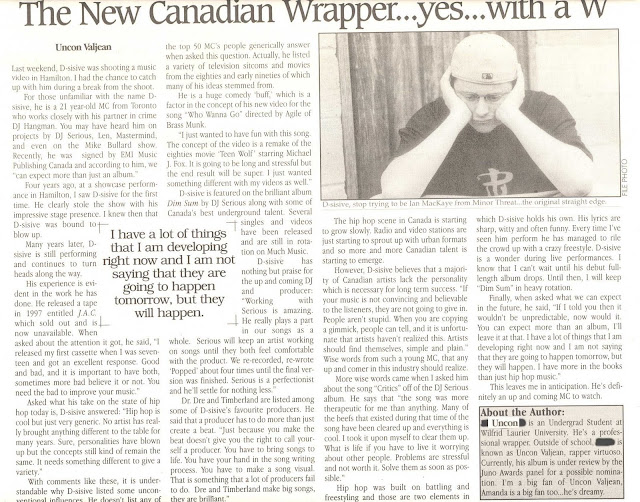 First off, I would like to say that I didn’t write that headline. I was actually quite angry when I saw it. I didn’t touch on race at all anywhere in the article because I just wanted to focus on how much talent D-sisive has. I think music should be colourless. That’s one of the reasons I hated the fact that the headline called attention to something that isn’t relevant to the music or the story.
When I showed D-sisive the article last month he didn’t seem too concerned about it. In fact, he thought the trip down memory lane was funny.
I have to point out that I also didn’t sanction the panel they put about me at the end of the article either. But unfortunately, when you write for a newspaper, you rarely have any input into the formatting of the article or the headline, as was the case for this article. Nonetheless, I’m glad they ran the story and gave D-sisive some exposure.
So that was D-sisive back then. I hope you got a kick out of that blast from the past. Tomorrow I will share with you D-sisive Now, the interview we did at Call the Office just last month. See you then! (see what I did there)