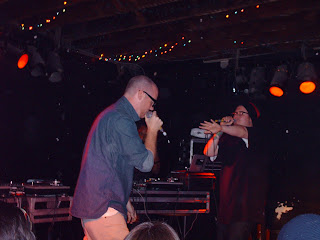 I remember when D-sisive first came out. I was simply blown away at how he could get on the mic and destroy anybody who would dare to battle him in a cipher. He was an animal on the mic and it was obvious how much passion he had for hip-hop. He had great witty punchlines, an awesome delivery, and it seemed like he was destined to soar to great heights in music.

He put out an EP, had several guest features on different records, did tons of shows, and then he just seemed to disappear. He finally resurfaced with an EP entitled ‘The Book’ in 2008 in which D-sisive was clearly exploring some dark new territory. Anyone expecting the battle-ready, humourous D-sisive was met with a more introspective rapper who shared some pretty dark and depressive thoughts. This project threw a lot of listeners off. It really wasn’t expected.

D-sisive continued bearing his soul and making emotionally poignant music with ‘Let the Children Die,’ which he quickly followed up with a free album ‘Jonestown,’ and his latest album ‘Vaudeville.’ In between these projects he has also dropped some amazing single tracks.

I’m glad ‘The Book’ didn’t throw me off because I’ve always loved his music. He really is an amazing artist. I hope I didn’t offend him when I told him that I didn’t like ‘The Book.’

Of course, that’s not it at all. I think that ‘The Book’ was just something that I wasn’t prepared for as a listener. D-sisive has changed and grown as an artist. He is more open and emotional now. It was a sound far-removed from his early work and it simply threw me off.

I asked him how he came upon this new sound. “I guess a lot of that came from the experiences that I went through over the 5 or 6 years that I wasn’t really creating music. I started making music when I was 15 in 1995. At that time and at that age, I hadn’t really experienced anything. I just really didn’t have anything to write about so I made the music that I did. I was really focused on battling and that was all I really cared about.

I wasn’t really paying attention to songwriting. All I wanted to do was freestyle, battle, punch lines. That’s all that I cared about, and I never really thought about telling my story or even telling a story, for that matter. Then around 2001, 2002 when things started to get serious in my life, my mind just wasn’t in it anymore. I just wasn’t interested in creating. It wasn’t a priority to me anymore.

It just go to the point where it felt like I didn’t have anything to write about. I was just kind of tired. My heart wasn’t in it. So, I went through what I went through and I finally came back after such a long hiatus, I guess. Ya know, I still made music off and on throughout that time but I wasn’t really focused.

After the hiatus, I didn’t want to come back as the same artist. Rounding near the end of 2002, when I kind of stopped recording, around that time I had a publishing deal with EMI, I was getting a bit of attention in the States, and there was interest. But I was also getting tired of the music I was making.

Making the battle songs, I was kind of looked at as a court jester and like a comedian. I really wasn’t interested in being that anymore. So then, fast-forward years, when I started making music again, I finally found my voice and I found something to talk about. And the from ‘The Book’ it all just grew from there.”

D-sisive admitted that I wasn’t the first person to tell him that ‘The Book’ threw me off. “I still get that. To this day. I’m putting out my fourth album next week in the span of two years. The other night, at one of our shows someone brought up ‘Popped’ and were talking about it like they’d just heard it. They were like, ‘That sh*t’s the f*cking dope sh*t, man. Like, that’s what you should be doing. Do that!’

But I’m so passed that. But I guess people still love the old D-sisive, ya know, before ‘The Book’ but that’s just not me anymore.”

Eternia, who’s been making a mark on the Canadian hip-hop scene since the 90’s as well, recently told me that, “I have a hard time listening to emcees who are considered dope but aren’t saying anything. So like MCs that got the flow and the delivery and the punchlines but they’re not saying things that make me think or make me appreciate their intelligence. It doesn’t have to be all intelligent rap but MCs who aren’t putting their life into their music and being vulnerable, I have a hard time appreciating them even when the rest of world is like, ‘Oh my goodness! They’re ridiculous!’ Ya know, I think it’s important to be human on record too. It’s important to be dope, but then you gotta be human.”

She makes a really valid point. D-sisive is ridiculous on the mic, always has been. But now he’s actually saying something, showing vulnerability, and being human. I think I was just unprepared for all of that when ‘The Book’ first dropped. I also think that he’s found more of a balance between the old D-sisive that everyone loves and the new more introspective and human artist before us today.

I’ve always been a D-sisive fan and absolutely love the new material that he has been dropping lately. If ‘The Book’ threw you off, please jump back and catch his new material. You won’t be disappointed.

Don’t forget to download the entire radio show or stream it with the player below. Not only will you hear things I haven’t covered in this story, you will also listen to a great mixset following the interview including some classic material from the one and only D-sisive. I’ll see you here for more D-sisive coverage as well. Make sure you come back tomorrow. We’ve only just scratched the surface so far. Stay tuned and thanks for listening and reading. Peace!

If you missed the first post in this series, go back and check out D-sisive Then and come back tomorrow to read D-sisive, In The Right Place and Time