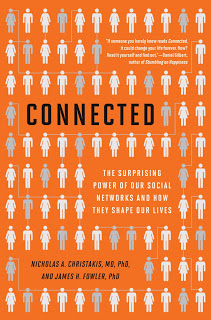 Connected: The Surprising Power of Our Social Networks and How They Shape Our Lives by Nicholas A. Christakis and James H. Fowler

I’m sure that we’ve all heard of Six Degrees of Separation – the theory that everyone is connected in six or fewer steps. That means you could be connected to me even if we have never met. Perhaps your friend knows my cousin’s neighbour’s barber. That links us in 6 steps:

This theory has become quite popular over the years. There is even a party game known as Six Degrees of Kevin Bacon where you try to link any actor to Kevin Bacon in less than 6 steps. It’s a fun game and I am often surprised on how so many actors can be linked to Kevin Bacon this way.

The authors of this book propose a new theory they call Three Degrees of Influence, which basically means that we can influence and be influenced by people we don’t know if they are only three degrees removed from us. In other words, our friends’ friends’ friends can have a influence on us and vice versa.

That is an amazing discovery! It sounds like it might be a bit far-fetched though. How can we be influenced by people we don’t even know? The authors share all sorts of examples of where this is the case.

I know that I have been influenced by something I’ve seen on Tumblr or Twitter that was originally posted by my friends’ friends’ friend and it made its way to my dashboard, made me pause, share it myself, and steer me in a certain direction.

It’s interesting to see all the ways we are connected. These connections might not be visible all the times but we are pretty much all connected in some form or another. If we lived our lives with this in mind, perhaps we would be better to each other, friendlier, kinder, and more helpful. That’s a great closing thought.