Yesterday, we looked at some of the things that stood out to me while reading Capturing Sound by Mark Katz. If you missed that post, you can go back and read it now. Or, just keep reading to find out how musicians started composing with cassette tape and vinyl.

In 1930, Paul Hindemith created a musical work using the technology he had available at the time; disc-cutting phonographs and microphones. He recorded a viola part and played it on one record player while another recording, this one of a xylophone, played on a second player. He then used a third phonograph to combine the different parts onto one record.

“We can imagine the complex choreography of the process, with Hindemith moving from viola to xylophone to play each part, and then from phonograph to phonograph to start, stop, and change speeds. Poor timing or clumsy movements would have ruined the work.”

Producers can combine sounds, make loops, use multiple tracks today with a simple click of a mouse. It’s incredible to see that all of this was done well before things could be recorded on tape or digitally manipulated. The Beatles often get a lot of credit for what they did with tape loops. Hindemith did the same kind of things decades earlier. Absolutely incredible!

Back in 1910, Alexander Dillmann suggested that it could possible to create music not by recording but by engraving discs manually. He wrote, “What if we, without soundwaves, could create the same or similar form through purely mechanical means? Wouldn’t this open the possibility of designing on such a disc a singer of unlimited range and timbre.”

If we can use a microscope to see the grooves in the record, we could create grooves to produce sound that didn’t exist before, Laszlo Moholy-Nagy suggested the creation of a groove-script alphabet to help aid in this. It would have served more like a palette of colours. The composer could choose and combine the various squiggles and soundwave patterns to create new music.

This idea was well ahead of its time. We were decades from seeing synthesizers and auto-tune software. Still, it proved to be rather impractical. In theory, it could work but nobody has really tried it. And today, we can do much the same thing in digital ways.

In 1929, Carol-Berard suggested that we could use “recorded noise and sound as source material for new works.” A year later, Raymon Lyon envisioned combing a thousand sounds together into a recorded work called Paysage (Landscape). Igor Stravinsky suggested that music could be written specifically for records. This was 60 years before DJ culture started to emerge and, once again, well before samplers or digital production. It seemed like several people could see the future of music ahead of them.

The author looks closely at the sampling and production of Fat Boys Slim’s “Praise You.” This song was built around an earlier song and the relationship between the two songs “simultaneously confirms and confounds our expectations of digital sampling, and in the process raises some of the complex aesthetic and ethical issues arising from this new form of musical borrowing.” I can’t do this portion of the book justice. If you are interested in this, I recommend reading this portion. It is fascinating and is covered in detail in Chapter 7.

Chuck D. (of Public Enemy) explains, “Our music is all about samples.” . . . Simply put, “Fight the Power,” and likely Public Enemy itself could not exist without it. “Fight the Power” is a complex and subtle testament to the influence and possibilities of sound recording; but at the same time, it reveals how the aesthetic, cultural, cultural, and political priorities of musicians shape how the technology is understood and used.”

“Fight the Power” samples dozens of different works, the total length of those fragments is fairly short – most are less than a second long. . . The four-and-a-half minute track can exist only through an extravagance of looping. As Chuck D. once said, “We put loops on top of loops on top of loops.” In just one four-second segment (0:22-0:28), at least ten distinct samples are being looped; the whole texture us then repeated four time as a meta-loop until the rappers enter. This section is wildly polyrhythmic; with no two samples overlapping completely, each one competes for the listener’s attention.”

I love hearing samples in hip-hop music. The way Public Enemy did it was slightly jarring and unconventional, but it goes to show you how new music can be created from segments of various pieces (even spoken work clips and noises).

Joseph Schloss illustrates how a sample adds authenticity to hip-hop, In his book he quotes the following passage from Jake One, “There’s something about the way old records sound when they’re put together right, You can’t really recapture ’em when you play live.”

Go back and read Part 1. 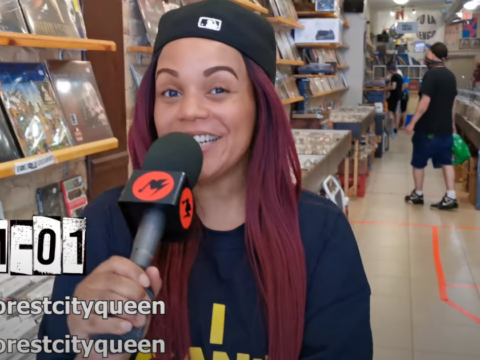 The Return of Rap City (On Our Screens)