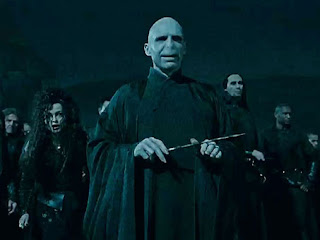 While I wasn’t overly impressed with the latest Harry Potter movie, there were two moments in the film that were very well done. (Spoiler Alert)
In one scene, a wizarding fairy tale was retold. This sequence was beautifully illustrated in a comic book style similar in tone to what we have seen in Frank Miller’s work.
In fact, this was not the only image the filmmakers used that sprung forth from the pages of a comic book.
In comics, we are often presented with a single image on the last page of the book. This image usually takes up the entire page. It ups the ante for the protangonist. This scene typically leaves the reader wanting more. Comic book producers have done this for years to entice the reader into buying the next issue.
The movie did this exact same thing, flawlessly. The last few moments of the film kept building and building up to that one moment.

We see the evil Voldemort get his hands on a powerful weapon. One that could turn the tides in his favour. He tests out the weapon and we see its destructive power. The elder wand lets out a spark that lights up the entire night sky.

It was a powerful image and the perfect one to end the film on. 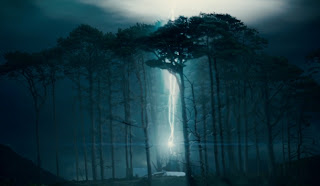 The final scene was one of the best parts of the entire movie. The music, imagery, and pacing of it was perfect. Even though I knew it was coming, I was fascinated to see it played out in front of me.

It seemed like the movie was just getting started when it ended here. I want to see more.

This final splash page did its job. The filmmakers did what the writers and illustrators of comic books do. They left us with one striking image that could only fuel a desire in us to see more.

I have high hopes that the next film will be a great one. The rest of the story follows through with this quicker pace. The stage has been set. The next issue (I mean film) will be a nail-biter. I can’t wait.