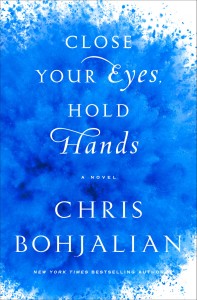 Emily Shepard used to be a regular teenage girl. She had to deal with her parents who often drank too much, but her life was fairly average. At least, I gather it was from reading this story written in her own words. The problem is that she isn’t the most reliable of a narrator, and she isn’t even that great of a storyteller. In fact, she is rather troubled.

When we first meet Emily, she is homeless and living in an igloo made of trash bags. We soon find out that she has recently become an orphan due to a disaster at the nuclear power-plant. The tragedy has forced the whole town to evacuate and so, not only has she lost her parents, but she has also lost her home.

Even worse than that, her parents served as the scapegoats for the entire tragedy. The news blamed the meltdown on operator error and made reference to the fact that they were both alcoholics and had been drunk that day.

Emily learns that her name isn’t an asset. People angrily lash out and accuse her parents of ruining their lives. So, she adopts the pseudonym of Abby Bliss, after a friend of her favourite poet, Emily Dickinson, and tries to survive on her own.

She is a likable character so it is a little hard to see her go through all of the hardships she does. She is a troubled teenager, and might very well have been one had this tragedy never occurred. But she would, most definitely, had more ssupport and probably not had such a terrible year.

I haven’t read a book like this one in a while. It is told completely from Emily’s point of view and bounces around a lot. It feels like it was written by a teenage girl and is a first hand account of her troubled life.

Here’s an interesting fact about this book. The audio book is read and performed by the author’s daughter. In the afterword of the CD, we hear an interview with Chris Bohjalian and Grace Blewer. It was a really great way to end the story and learn more about how both the text and audio were created.