Last night I went to the Classified concert in London, Ontario. I had a chance to sit down with the rapper before the concert and interview him for the first ever, on location interview for DOPEfm. 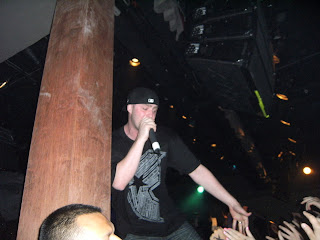 The turnout for the show was amazing. There had to be over 300 people there.

The show was amazing from start to finish. DJ IV spun all night long for all of the opening acts and for the main attraction. He even spun his own set in the middle of the show. The crowd was really hyped for it.

Classified had a full band and a DJ on stage with him. He played with the arrangements of his songs to great effect. He played hits from his last four albums.

To finish off the show, he hit us with his current single “Anybody Listening” and then quickly followed that up with his tribute “Oh…Canada.” He said that he always finishes off his concerts with that song.

But he must have lied

After that song, the house lights came on and his band started jamming. It was a pretty cool vibe.

On my way home, my girlfriend and I were stopped by a RIDE program. The police stop all the cars to check if anyone has been drinking and driving.

The officer asked where I was coming from and I told him “The Classified concert.”

He looked at me really suspiciously. I think he thought I was trying to be funny with him, like I was using classified to mean “top secret.” I just assumed he’d know who Classified was. But, it was clear he didn’t. So I added, “the rapper.”

The officer still didn’t seem to get it. He shone his flashlight in the back seat. But all was good and we were soon on our way back home.

I must say that was the weirdest RIDE program stop I’ve ever been through.

I had an amazing time interviewing Classified and watching him perform.

Read the transcript of the Classified Interview and download the podcast here.