I absolutely loved Transformers when I was a kid. It wasn’t a show about toys. It wasn’t just about robots that could change into cars, airplanes, or guns. It was so much more.

These robots were real. They had motives, they had character traits, and you couldn’t help but get completely pulled in to the story. Which, of course, is what made this cartoon series so enduring. 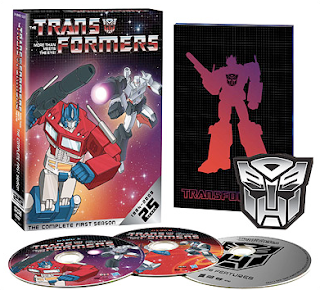 I was glad to see that the first season had finally been released domestically. I bought it this past summer, as soon as I saw it in the store. I didn’t even have to think about it. I knew I needed to buy it.

I was a little nervous that watching these episodes again that the magic of the series would have been lost, like it were part of my childhood that I couldn’t return to.I was pleasantly surprised to see that the stories still hold up, that the characters are as well-defined and likeable as I remembered. I really enjoyed rewatching the episodes.

I was hoping that by purchasing this first set that they would actually release all four of the seasons. So far, I don’t think there are any plans to do so.

However, I just saw this new box set in the store. 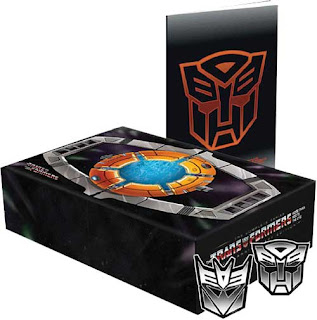 Yes, this is the complete series, all four seasons of Transformers. I absolutely love how the box is drawn like the matrix and how it pulls apart to reveal the 16 DVDs. Man, that brings back memories.

It also comes with two magnets. The season 1 set came with an Autobot magnet.
I so want this box set. I had to linger in the aisle for a few minutes and really consider whether or not I should buy it. I knew I wanted it. But ultimately, I left the store without picking it up. I really can’t afford to spend close to $200 on it.

So for now, I am going to put it on my proverbially wish-list.

See you here tomorrow for Wish # 2.