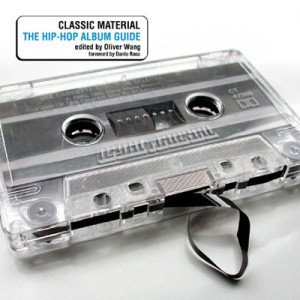 This book contains intelligent writing on over 60 classic hip-hop albums from 20 different music journalists and experts. It spans 20 years of hip-hop history and does so in a very respectful way.

It was cool to find out that “Snake Eyes” on this album featured five different samples running throughout the track including “an Ike Turner piano vamp, a Johnnie Taylor bassline, and  Jesse Anderson flute melody.”

The book covers sampling at the legal troubles that some hip-hop musicians got into because of it. It’s sad to say, but an album like this would be very hard to do in a day and age where samples need to be bought and cleared.

Pete Rock’s “particular gift has been in his layering, his ability to juggle any number of different elements – a bassline twiddle here, a keyboard tinkle there, not to mention horns. Pete Rock’s signature sound of this era was his horns.”

It was so great to hear samples layered on top of each other in uniquely creative ways. Hopefully this isn’t just a remnant of old records and something we will be able to get back into in the near future.

An Obscure Album that Revolutionized Music

I enjoyed the piece on Freestyle Fellowship’s “To Whom It May Concern…” especially considering that Myka 9 is still making music fifteen years later. He was even featured in my Top 15 of 2015 albums.

Could it be Keith “Cowboy” Wiggins of Grand Master Flash and The Furious Five fame? Jeff Chang thinks so.

I might argue that Branded Moore, a local emcee, Flava Flav, and Freaky Tah could be added to this list.

Allen Gordon says this album “was a conceptual work that attempted to kill the ‘nigga’ mentality his early work reflected in order to give birth to a new culturally and community-minded ‘Black man.'”

What a great perspective on one of my all-time favouirte albums.

Ice T made himself “an elder statesmen, many miles in front of the guns-blazing stereotype he ushered in. Ice was light-years ahead, fearless in his beliefs.”

Here I want to draw a comparison to Jeru’s record of the same title. Both tracks are an “indictment of move-fakers trying to profit from chaos”

“…his ability to lay his soul bare – contradictions, fears, psychosis, and all. What makes these albums classic is not the sound of his beats and rhymes, but the ferocity of his honesty and the thumping of his heart.

I couldn’t agree more. This book is chopped full of great writing about some of my favourite hip-hop albums and about a few albums I might just have to dust off and play again.

What a Night for Music!

Write With Confidence in 7 Steps