J-Spade of Citizen Kane posted this on Facebook a few weeks ago. 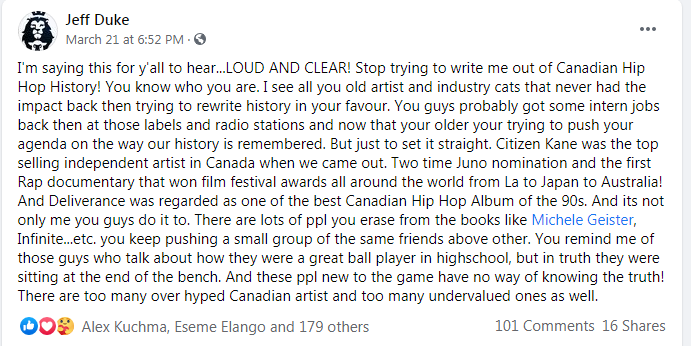 “I’m saying this for y’all to hear…LOUD AND CLEAR! Stop trying to write me out of Canadian Hip Hop History! You know who you are. I see all you old artist and industry cats that never had the impact back then trying to rewrite history in your favour. You guys probably got some intern jobs back then at those labels and radio stations and now that your older your trying to push your agenda on the way our history is remembered.

But just to set it straight. Citizen Kane was the top selling independent artist in Canada when we came out. Two time Juno nomination and the first Rap documentary that won film festival awards all around the world from La to Japan to Australia! And Deliverance was regarded as one of the best Canadian Hip Hop Album of the 90s.

And its not only me you guys do it to. There are lots of ppl you erase from the books like Michele Geister, Infinite…etc. you keep pushing a small group of the same friends above other. You remind me of those guys who talk about how they were a great ball player in highschool, but in truth they were sitting at the end of the bench. And these ppl new to the game have no way of knowing the truth! There are too many over hyped Canadian artist and too many undervalued ones as well.” 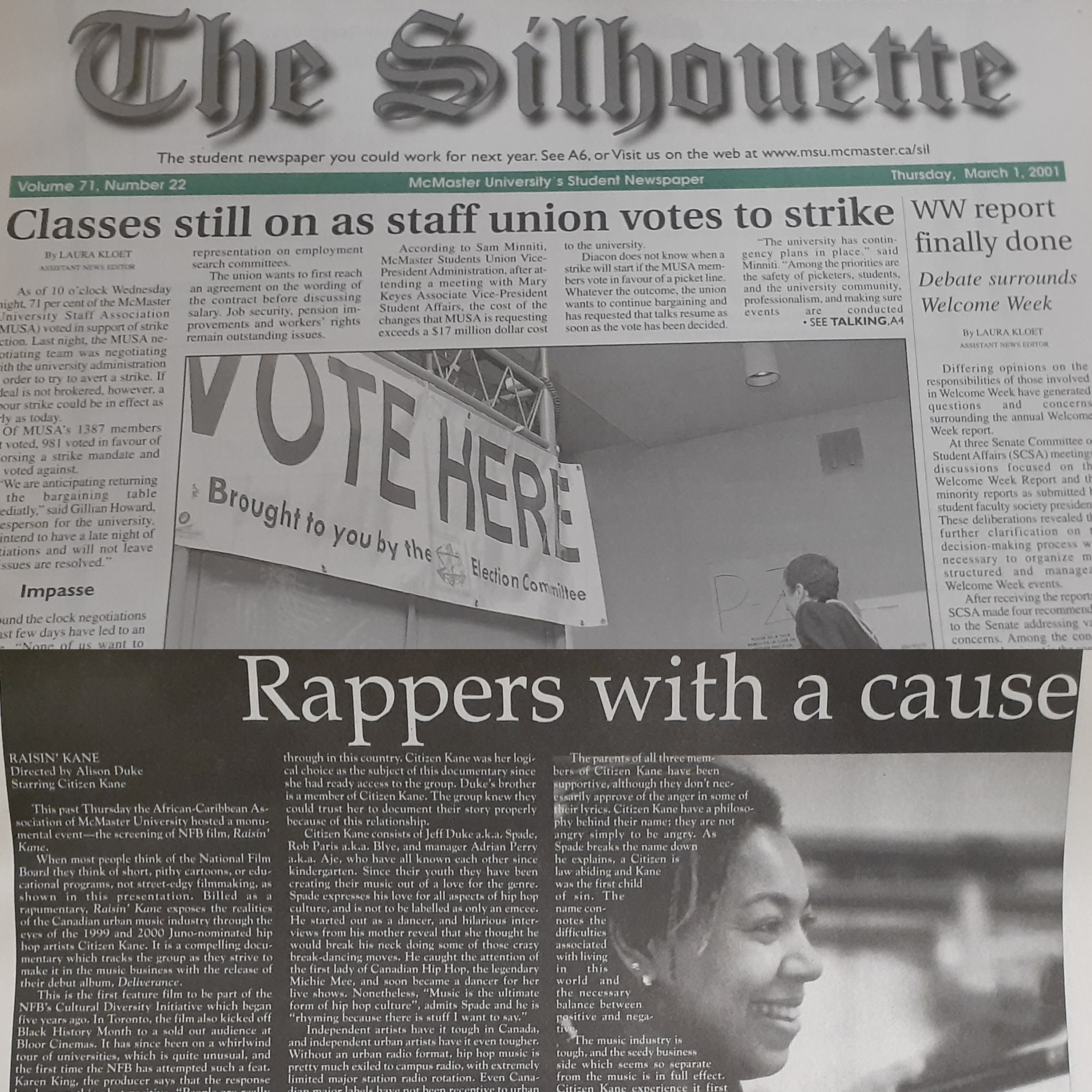 I had the chance to write about that documentary for the university newspaper 20 years ago. This is from McMaster University’s The Silhouette back in March of 2001. 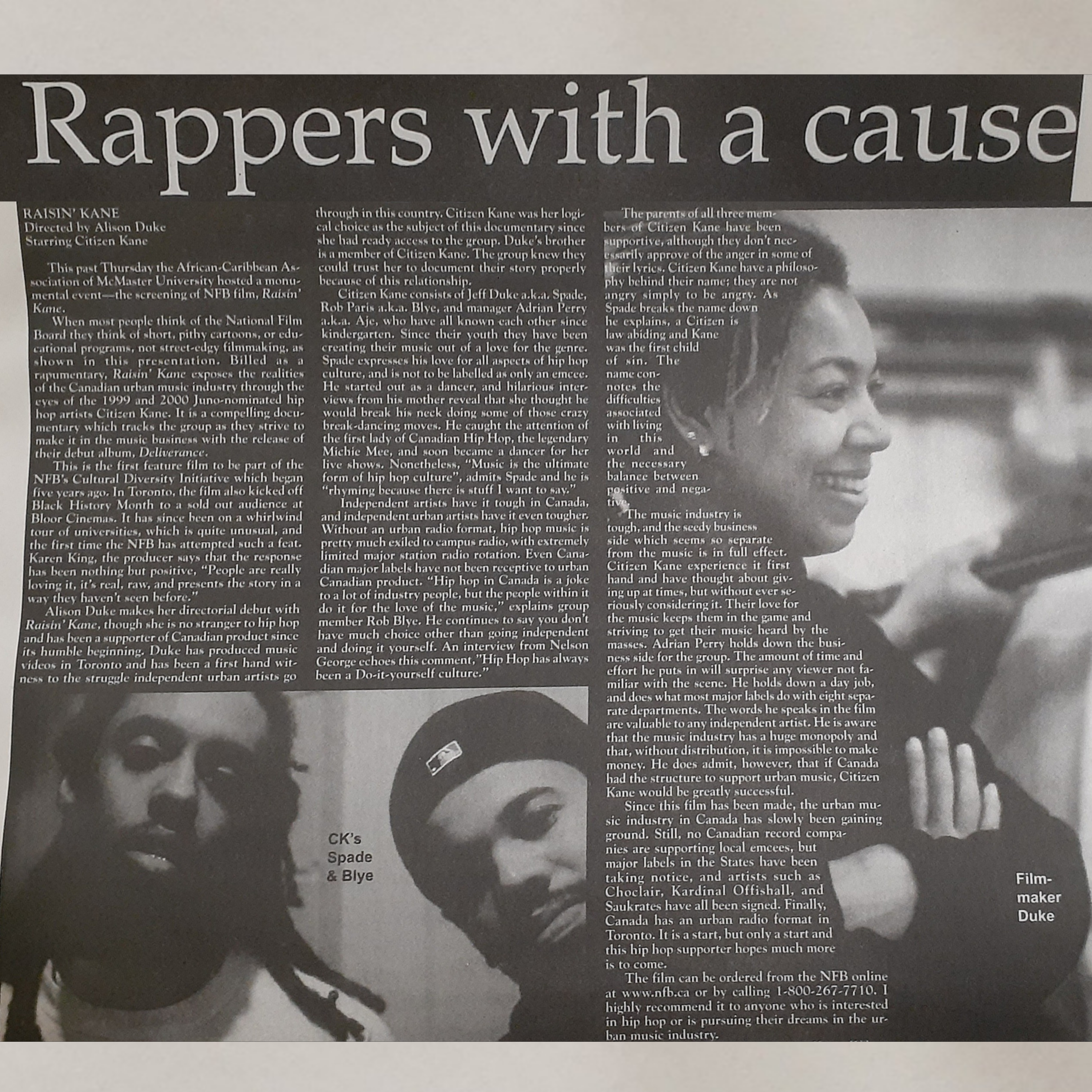 Rappers with a Cause by Chase March (March 2001)

This past Thursday the African-Caribbean Association of McMcaster University hosted a monumental event – the screening of NFB film, Raisin’ Kane.

When most people think of the National Film Board they think of short, pithy cartoons, or educational programs, not street-edgy filmmaking, as shown in this presentation. Billed as a rapumentary, Raisin’ Kane exposes the realities of the Canadian urban music industry through the eyes of the 1999 and 2000 Juno-nominated hip-hop artists Citizen Kane. It is a compelling documentary which tracks the group as they strive to make it in the music business with the release of their debut album, Deliverance.

This is the first feature film to be part of the NFB’s Cultural Diversity Initiative which began 5 years ago. In Toronto, the film also kicked off Black History Month to a sold out audience at Bloor Cinemas. It has since been on a whirlwind tour of universities, which is quite unusual, and the first time the NFB has attempted such a feat. Karen King, the producer says that the response has been nothing but positive, “People are really loving it, it’s real, raw, and presents the story in a way they haven’t seen before.

Alison Duke makes her directorial debut with Raisin’ Kane, though she is no stranger to hip-hop and has been a supporter of Canadian product since its humble beginning. Duke has produced music videos in Toronto and has been a first hand witness to the struggle independent urban artists go through in this country. Citizen Kane was her logical choice as the subject of this documentary since she had ready access to the group. Duke’s brother is a member of Citizen Kane. The group knew they could trust her to document their story properly because of this relationship.

Citizen Kane consists of Jeff Duke a.k.a. Spade, Rob Paris a.k.a. Blye, and manager Adrian Perry a.k.a. Aje, who have all known each other since kindergarten. Since their youth they have been creating their music out of a love for all aspects of hip hop culture, and is not to be labelled as only an emcee. He started out as a dancer, and hilarious interviews from his mother reveal that she thought he would break his neck doing some of those crazy break-dancing moves. He caught the attention of the first lady of Canadian Hip-Hop, the legendary Michie Mee, and soon became a dancer for her live shows. Nonetheless, “Music is the ultimate form of hip hop culture”, admits Spade and he is “rhyming because there is stuff I want to say.”

Independent artists have it tough in Canada, and independent urban artists have it even tougher. Without an urban radio format, hip hop music is pretty much exiled to campus radio, with extremely limited major station radio rotation. Even Canadian major labels have not been receptive to urban Canadian product. “Hip Hop in Canada is a joke to a lot of industry people, but the people within it do it for the love of the music,” explains group member Rob Blye. He continues to say you don’t have much choice other than going independent and doing it yourself. An interview from Nelson George echoes this comment, “Hip Hop has always been a Do-it-yourself culture.”

The parents of all three members of Citizen Kane have been supportive, although they don’t necessarily approve of anger in some of their lyrics. Citizen Kane have a philosophy behind their name; they are not angry simply to be angry. As Spade breaks the name down he explains, a citizen is law abiding and Kane was the first child of sin. The name connotes the difficulties associated with living in this world and the necessary balance between positive and negative.

The music industry is tough, and the seedy business side which seems to separate from the music is in full effect. Citizen Kane experience it first hand and have thought about giving up at times, but without ever seriously considering it. Their love for the music keeps them in the game and striving to get their music heard by the masses. Adrian Perry holds down the business side for the group. The amount of time and effort he puts in will surprise any viewer not familiar with the scene. He holds down a day job, and does what most major labels do with eight separate departments. He is aware that the music industry has a huge monopoly and that, without distribution, it is impossible to make money. He does admit, however, that if Canad had the structure to support urban music, Citizen Kane would be great successful.

Since this film has been made, the urban music industry in Canada has slowly been gaining ground. Still, no Canadian record companies are supporting local emcees, but major labels in the States have been taking notice, and artists such as Choclair, Kardinal Offishall, and Saukrates have all been signed. Finally, Canada has an urban radio format in Toronto. It is a start, but only a start and this hip-hop supproter hopes much more it to come.

Watch the NFB film with the player above and enjoy this dive into Canadian hip-hop history. I highly recommend it to anyone who is interested or is pursuing their dreams in the urban music industry.

DJing the London Stop of The Not Guilty Tour

My Favourite Song Last Year at This Time (Day 30)