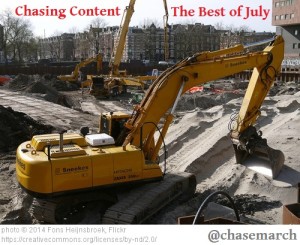 It’s time to grab the excavator and dig through the archives.

We do this at the start of every month to look back at what was happening last year at this time.

Read all of the posts from last July,

or just these favourites . . .

A Run to the Lighthouse

I never ran to a lighthouse before. That was a pretty cool trail run!

Twitter revolutionized the way we communicate and it even influenced a new poetic style in hip-hop. Or is it that new?

I explore the history of Hash-Tag rap and trace it’s origins back to the very start. You’ll be surprised at where this journey takes us. Read, listen, or download the podcast / radio show. It’s one of my favourite episodes.

I started doing The Word is Bond Podcast over two years ago.

Last year at this time, we decided to rebrand the show as The Word is Bond Rap Radio Hour.

More recently, I started a new two-hour radio program on 94.9 CHRW so I dropped the word “hour” and now refer to the program as Word is Bond Rap Radio or WIB Rap Radio for short.

Gareth Malone and the Power of The Choir

Gareth Malone inspires me. I’m not a singer but his ability to bring a group of musicians together in any situation is absolutely incredible. BBC documents his journeys is several different television series. The Choir is one of the best and I have enjoyed every season.

This book is a behind-the-scenes look at the television series and it was a great read too!

No sense in letting these great post getting buried in the archive. So, dig them up, click on the links above, and enjoy!