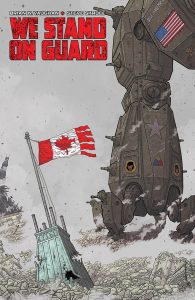 In the year 2112, a war erupts between the United States of America and Canada. This graphic novels tells the story of a small band of freedom fighters doing their best to stop the invasion and “stand on guard for their home and native land,” a reference to the Canadian National Anthem.

The book is uniquely Canadian too, despite it being created by a mostly American cast. The artist, Steve Skroce, is Canadian, but the rest of the creators are not.

Several characters in the book speak French and the creators fail to provide a translation for the reader. Many times, the reaction  of the other characters let us know what was said, but sometimes, we are left to wonder. The art helps us figure it out for non-French speakers.

We are also reminded that Superman was a Canadian creation but was warped by American publishers. 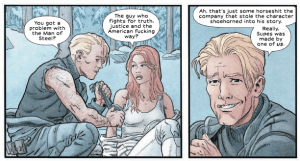 Another interesting thing in this book was how the CBC (Canadian Broadcasting Corporation) went underground and continued to provide pirate transmissions to help both freedom fighters and citizens now living under American rule. It was nice to see national public radio still having an impact one hundred years into the future.

The horrors of this war are graphically displayed in this book. It is definitely not a title for children. One scene in particular disturbed me for a few days.

The story is well told and fast-paced. It captured me from the very first page. Brian K. Vaughan always tells engaging stories and the rest of the creators did a great job with the book too.