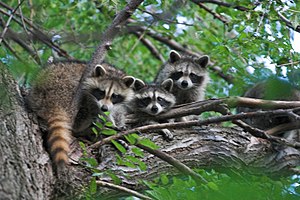 I’m lucky to have a girlfriend who is such a great cook. She can even work her magic on an open fire. I know if it were left up to me, we would have eaten hotdogs, sausages, and simple stuff like that during our camping trip.

Dana cooked some amazing meals on that campfire last week. We had t-bone steaks for one meal and they were delicious.
We ate fairly late that night because we’d spent a long afternoon on the beach. I cleaned the dishes and made sure that all of the food waste was put into a garbage bag.
I thought I should take the garbage bag right to the bin, but it was a fair walk to the front gate to do so. Dana suggested that we just take it easy and make some smores for desert. That sounded like a great idea, so I left the bag beside the fire, and we enjoyed desert.
It got dark really quick. I really didn’t want to go for a walk, but figured I’d better see to the garbage since it had been sitting there for about an hour.

I looked over to the garbage bag, which was only a foot away from my chair and pretty much right beside the fire. And I saw a raccoon right in the bag. I reached for the flashlight and quickly discovered that there were three raccoons right on our campsite.

I tried to light a stick on fire and wave it at the raccoons. I shouted, banged a stick on the ground, and shined the flashlight directly at the little critters. It didn’t phase them at all. I grabbed the garbage bag but they just looked at me like they weren’t going to leave without the scraps of meat that were in it.

Our site had brush on either side, and we had neighbours directly behind us. The raccoons were blocking my path to the road. I didn’t know what to do.

Dana was hiding in the tent, shining the flashlight back and forth like a lighthouse operator.  She suggested I just cut through the neighbour’s site to go and get rid of the garbage.

I cut through the site and ran to the front gate to throw the garbage bag in the bin. When I got back, I was sure that the raccoons were gone. Dana and I decided to walk to the washroom facilities and call it a night.

As we were about to leave our site, Dana shined the flashlight up in the tree. And sure enough, all three raccoons were up on a branch. They were very determined little critters.

Your turn to add to the discussion.

Have you ever had uninvited guests to your campfire?

Have you had any encounters with raccoons?

The Borg and The Cybermen Join Forces