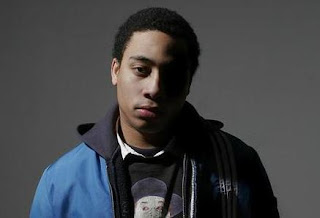 Cadence Weapon was at the 2010 Stylus DJ Awards to accept a posthumous award on behalf of his father. T.E.D.D.Y was inducted into the Stylus DJ Hall of Fame for his groundbreaking work in Canadian radio. We had the chance to sit down and talk with his son who is also a well-respected musician himself.

You can download this interview, read it, or stream it for free. Don’t forget to tune into DOPEfm and this blog for all of our coverage of the 5th anniversary of the Stylus DJ Awards. Enjoy!
Chase: “Alright this is Chase March for DOPEfm and I’m here with Cadence Weapon, how’s it going man?”
Cadence Weapon: “It’s going good. How are you doing?”
Chase: “Pretty good. I see that you’ve got a Stylus DJ Award in front of you. Can you tell us what that’s for?”
Cadence Weapon: “This award is to commemorate my father being put in the Stylus DJ Hall of Fame this year. It’s a posthumous award. He passed away in 2003 but I’m very excited that he’s finally getting his due.”
Chase: “That’s excellent. So we know you as Cadence Weapon and the weird, genre-blending stuff you do.”
Cadence Weapon: “Hybrid tunes.”
Chase: “Hybrid tunes. Nice! I’m assuming your dad was a big influence on you getting into music.”
Cadence Weapon: “Definitely. Having a DJ in the house as my father, I was hearing every kind of music you could imagine. He would bring me into his DJ show which was on CJSR 88.5 fm in Edmonton. He would bring me in sometimes and I would get to play on the radio. That was very much influential in making me want to DJ and rap and make beats and all that stuff.
He is a contribution to Edmonton, which is why I’m here. He was the first person to play hip-hop or R&B or any urban music. In the late 70’s when it was not even a blip on the radar of Canadian radio, he was there. I think it’s amazing that this has finally happened. I know it has to be in the 21st Century and he has to be gone but it’s happening. I’m proud of him.”
Chase: “This is the 5th anniversary of these awards and it’s really cool to be putting that focus on the DJ. That is where this whole culture, that’s where hip-hop came from, from the DJ and guys like your dad. So it is really cool to see him being honoured this way.”
Cadence Weapon: “I think it’s really nice. I also think, as a whole. the idea of a mixshow DJ, they don’t really much credit in hip-hop culture. Historically, you rarely hear of people who were making stop tapes and pause tapes and things like that. It’s nice to have an awards who that is strictly focused on that and it’s nice to see people come out to it and really want to be a part of it, to be involved and supportive of the community in general.”
Chase: “Definitely. That was a big influence for me. I was always listening to college radio and mix shows and taping that stuff. I taped Mastermind Street Jam and I taped stuff from CFMU all the time. Yeah, that’s where it came from and you just build on that.”
Cadence Weapon: “That’s kind of the foundation, ya know? There are so many instances where you hear classic rappers be like, ‘Well, if it wasn’t for hearing this song on a weird mixtape before you could buy a rap CD in a store.’ ya know?”
Chase: “Totally. So can we look forward to a new Cadence Weapon record soon?”
Cadence Weapon: “Yeah, I just finished recording a new record here in Toronto actually. Toronto and Brooklyn. We’re just finishing mixing now. It should be out at the beginning of next year in 2011. It’s called ‘Roquentin’ and it’s a wild journey. It’s all live band and it sounds like Talking Heads with rap on it.”
Chase: “Nice. Well congratulations to the posthumous award for your dad there. Big ups and respect to you and your fam. Thanks for taking the time to sit down with us.”
Cadence Weapon: “Thanks for having me.”
Chase: “Alright, peace!”
Cadence Weapon: “Right on!”

Getting Paid with Mark Steele