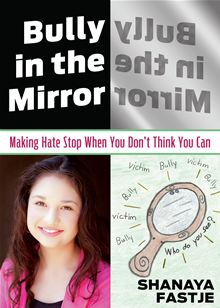 Chase: “All right everybody, this is Chase March. I have a special guest on the program right now, author of “Bully in the Mirror: Making Hate Stop When You Don’t Think You Can,” Shanaya Fastje.

You can read the transcript of the interview, stream in with the player below, or download it to listen to later.

So, Shanaya, I read your book cover to cover. I know there are some people out there who think bullying is completely natural and that it is just part of childhood.”

Shanaya: “There is nothing natural about it. Most people say, ‘Bullying is natural, it happens all the time, everybody goes through it.’ But it is not in any way, shape, or for, normal. It becomes not normal when kids feel mental pain with or without physical pain. Parents have to see what they believed was normal is no longer normal.

It’s about a lack of education on the subject. People need to educate themselves about the realities of bullying and living in this society as a kid or a teenager. It causes pain, and anything that causes pain is not normal.”

Chase: “This book is incredible and based on the conversation we’ve had up to this point, I think a lot of people would be surprised to learn that you are a teenager.”

Shanaya: “I get that often. I’m only thirteen. I just graduated high school last year. People don’t really comprehend that I’m actually thirteen, but I’ve definitely gotten used to it.”

Chase: “It’s pretty impressive and inspirational what you have already been able to do. And ‘Bully in the Mirror’ isn’t even your first book.”

Shanaya: “This is my fourth book. I’m currently working on my fifth book which is going to be my first fiction. It’s a mystery / suspense novel. I am currently negotiating piloting out my fifth book for film. I’m also negotiating my fourth book for film because I just opened up my own production company. I have a license and I’m working on producing different projects. I would love to produce any of my books into some kind of film, television, or series.”

Chase: “Wow, that is incredible. Just to make a personal connection here, on page 85 of your book you mention reading another book, ‘Psycho-cybernetics.’ I remember reading that book at your age too.”

Chase: “The title of that book alone would scare most people off, but it was a good read. And so is your book, “Bully in the Mirror.”

I started a Facebook page this year because I wanted to open up the lines of communication between school and home. I thought it would be a good tool to stay in touch with students and parents, but just recently, I was cyber-bullied on it.”

Shanaya: “Bullying itself has become a social epidemic. It used to be that kids would fight physically and there’d be some name calling. Now, it’s gotten to the point that cyber-bullying is now in existence. Kids are now bullying each other using social media – Facebook, Twitter, email, and texting.

It’s okay for kids to go on Facebook and Twitter, but sometimes it becomes an obsession. It becomes an addiction. This addiction goes a step further and these kids sometimes think they are superior because they can always disguise themselves using anonymous names. It becomes very dangerous.

It is now getting to a point where kids are, more and more, committing suicide because they are being cyber-bullied. Sometimes it can be by their own friends. Next to physical bullying, cyber-bullying is one of the more dangerous forms of bullying.”

Chase: “When I got cyber-bullied last week, I was able to shake it off for the most part. But I look at what some of the kids are doing online, I see that this is a regular way that kids are talking to each other on these platforms. They are on Facebook putting down people. If I was a kid living in this day and age, and I had to go through that on a daily basis, I don’t know how I’d handle it.”

Kids do have a hard time handling it. I’ve been bullied but I don’t like comparing my bullying stories to other kids because it hasn’t necessarily been severe. I’ve learned to grow self-confidence and self-esteem from a very young age. I’ve been cyber-bullied and it’s very ridiculous the way kids now talk to each other. It’s like there are no morals, respect, or dignity. I want to help bring some of those morals back into kids’ lives.”

Chase: “I wanted to use it as a teachable moment as well. I want kids to know that it is not okay to talk like this online, and that you should watch carefully what you say, and don’t press send if you think it is going to hurt, belittle, or demean somebody. But when I brought this to my principal, his first response was to shut it down, to close the Facebook page. So I had to shut down the site. Part of the problem, he said, is that this is the culture of Facebook. This is what they do and this is how kids are talking on Facebook and that is not something we are going to change.”

When somebody sees one person doing something good. Let’s say someone is being cyber-bullied on Facebook. If one person comments, ‘That’s not right’ or “Stop’ or “I’m going to report you,’ then another person is going to step in, and then another. It’s a chain reaction. It’s the same with physical and verbal bullying as well. People can’t give up too easily because quitting means stopping the chain reaction and we can’t really end that. It’s important for the sake of this generation of kids and their safety.”

Shanaya: “Of course, one of the main keys to reduce bullying is the bystander. Some people might be afraid to tell an adult or they might feel threatened by the bully. But it is the bystanders’ job to go and get help and to tell.

Victims have true power but they sometimes mistake it that they don’t have any power and the bully has all the power over them. In reality, the bully is pretending to use the victim’s power as their own to trick the victim into thinking that they are powerless. Bullies are actually weak-minded. Since they are so weak, they can learn to build the strength of their own mind just like victims can.

Everybody needs to work hand-in-hand in the situation. It’s not just the victims that need to work on their self-esteem and self-confidence. I think parents have to have a bog part in making this happen. Parents need to talk to their children and help them get through whatever issue is going on, no matter what time they get home from work. The parents are the role models and if the kids see that their parents are willing to help, they will know that they’ll feel that they are not really alone because that’s what victims often feel. They feel alone and that’s why they are so scared to go an tell if they are being bullied or hurt.”

Chase: “You have some good advice in this book. On page 84, you write about how we can sometimes be a little too hard on ourselves and then you write, ‘If you can think it, you have the power to think it differently. Every negative thought can become a positive one. If you think it, you can do it.” Very wise words there.

Shanaya: “Thank you. I believe that every problem has a solution. I like looking at things not as problems but as problems that need solutions. Instead of focusing on the negative, I like to focus on the positive and how I can fix this. Nothing is going to change and nothing is going to get fixed if you keep dwelling on a problem and keep dwelling on negativity. There is always a way to switch it around.

We’ll continue this interview tomorrow. If you can’t wait that long, listen to the entire interview right now with the player below, or download it to listen to at your leisure.

See you tomorrow. Thanks for tuning in!