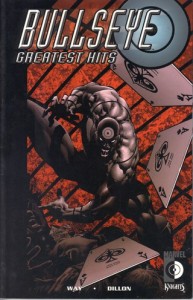 This is a one-off story that attempts to tell the origin of one of the most dangerous villains in comics. This graphic novel collects the entire run of the five issues mini-series.

First off, the title is a bit of a misnomer. This wasn’t a greatest hits compilation. It didn’t retell any of his victories or legendary battles.

Instead, we see him being held in a top-secret and super-secure facility. A negotiating team goes in to talk to him about the whereabouts of a nuclear bomb that he had stolen just prior to being apprehended.

Bullseye acts as though he is exactly where he wants to be, and that he, in fact, has the upper hand, despite being locked down in a seemingly inescapable prison.

Of course, with Bullseye things are never quite what they seem.

This was a nice read and a good companion to my favourite superhero, Daredevil.

Novel Study Takes to the Track