I think Bubble Bobble is the best video game ever. 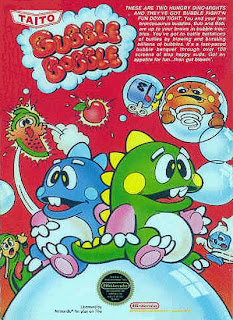 And I’m not sure why it isn’t often mentioned in video game circles as a classic. I love playing this game. I can remember plunking in quarter after quarter into the arcade machine at the bowling alley near my house.

The one thing I liked about this game is that you could actually play for quite some time on one quarter. Other games didn’t give you much for your twenty-five cents.

As far as game play, it was pretty basic. Each level was a single screen much like Pac-man. The heroes of the game were Bubble Dragon Twins Bub and Bob. You could either play solo or work together with a partner to pass the levels.

The goal of each level was to capture the bad guys by trapping them in a bubble. They would then float around the screen until you either popped the bubble they were in or they escaped from it after a certain amount of time. Whenever a enemy escaped they became angry and moved across the screen very fast. It made the game more of a challenge.

You collected bonus points by running through the prizes that would appear on the screen, once again, much like Pac-man. But the best prize you could get in this game was rapid-fire bubbles. You could also bounce on the bubbles to get to certain spaces in the level that you couldn’t otherwise travel to.

It was an awesome game and I was super-excited when I found that it was available on Commodore 64. I immediately bought a copy and my brother and I worked hard trying to beat all 99 levels of the game. 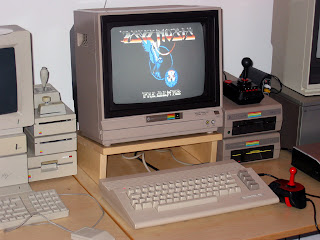 I still have my Commodore 64 in a box in the basement. But I am very tempted to break it out, hook it back up, and play this game again. The best thing about it was that the game was just as good on the computer as it was in the arcade, that wasn’t so with a lot of the titles I had.

Did you ever play this game?

Did you have a Commodore 64 too?

Putting the Pieces Together

Everything is Awesome! (Do we overuse that adjective?)

No Resolutions – Set Some Goals Instead