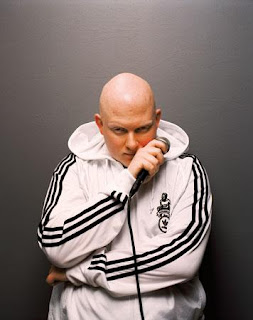 Last week, I was honoured to meet one of my heroes in hip-hop, Brother Ali. We sat down before his show in Toronto and had a nice conversation for over an hour. He then took to the stage and rocked the house. It was an amazing night!

I hope you enjoy this interview as much as we did. You can download it for free from the DOPEfm page or stream it with the player below. I have also transcribed it here for you.

Chase: “Alright everybody this is Chase March and I am very excited because tonight is the Brother Ali concert. I’ve been a fan of this dude for a long time and it’s awesome to be sitting beside him right now. How ya doing Brother Ali?”

Chase: “Nice! So, you’ve been touring a lot lately. You were just in the U.K. weren’t ya?”

Brother Ali: “I just did a month in Europe. Prior to that, I did two months in the U.S. Now I’m doing another two months in Canada and the spots in the U.S. that I didn’t get at in the last tour. Then I go home for a couple weeks and go right back to Europe again. Get done with that, then we go to Australia and then come back for a couple weeks again and then we do the U.S. again and start all over.”

Chase: “Wow! That must be really tough because even from your lyrics we can see that you’ve got a new baby girl, it says on the new record. So how’s that being away from your family? Are you able to bring them with you sometimes?”

Brother Ali: “I don’t bring them with me that often. I just had a show in Hawaii. We just had one show but I took my wife and children to Hawaii and we stayed there for a week and just had some good, quality time together. It’s difficult, man. Everything in life is a balance. You have to do everything in balance.

So I’m having to balance between the two main things in my life that I love, that I wish I could dedicate a hundred percent of my time to but I just realistically can’t. I would love to give all my time to my music and just completely jump in head first, ya know what I mean? Like people like Kayne and ?uestlove and guys like that, they live their music 24 hours a day, that’s all they do. I would love to do that.

I would also love to be a stay-at-home dad, ya know what I mean. But the truth is that I can’t do either one of those. So I have to balance them. And when I’m home, I’m able to spend a lot of time with my kids and with my family. I either work while my kids are at school and then see them in the morning and at night, or I work all night when they’re in bed and see them in the morning and at night. But when I’m at home, all of their free time is me.

Brother Ali: “Also when I’m at home I have to make new music ‘cause otherwise new albums would never come, ya know? So either while they’re in bed or at school, that’s when I get my work done.”

Chase: “Nice! Last summer, the album for me was the ‘Truth is Here’ E.P. I had that on blast the entire summer. And then when I saw your video for ‘Us,’ I thought it was a teaser for the album and that was an amazing song. That song almost brings tears to my eyes because it is so powerful and the video is pretty amazing how you’re working with a choir and live instruments. I really like the message of it too. The artwork for ‘Us’ is amazing as well.”

Brother Ali: “Yeah, the credit for that goes to Siddiq who runs Rhymesayers. I switched it on him at the last minute. The name of the album was gonna be ‘Street Preacher.’ I turned the album in, it was done, and we’d done a couple of photo shoots for the ‘Street Preacher’ title. He actually came to me and said, ‘Do you think there’s something not quite right about this album?’ I said, ‘Yeah, but it’s not the music. I know it’s not the music.’ He said, ‘Do you think it might be the title?’ I said, ‘Yeah, definitely.” I changed the title to ‘Us’ and he came up with the idea to do silhouettes and he passed it on to an artists by the name of Keith Washington, who actually pulled it all together and he did a great job.”

Chase: “Yeah, I’m actually a teacher and I do this thing where I have the students respond to an image and I put that album cover up once because I wanted them to talk about the team work and they way it looks like the silhouettes are working together with triangles to build the word ‘Us’ in the middle of the air. It was interesting some of the response I got from that, they were able to pick that up. The I showed them your ‘Us’ video and we played it over and over again that one morning in my Grade 3 class. They were feeling that.”

Chase: “One of my favourite tracks on this album is ‘Fresh Air’ and I’d like to drop that track right now and come back and talk to you some more.”

Chase: “Alright so this is ‘Fresh Air’ from Brother Ali off his excellent album ‘Us.” If you don’t have that, go get it. I ran to the store when this album came out and I haven’t done that in a long time. I needed that because the album is awesome, the art work is really good, and this is my favourite track of it. This is Chase March, we’ll be right back.”

Chase: “Alright that was ‘Fresh Air’ from Brother Ali and we’re sitting with Brother Ali. How’s it going?”

Chase: “I love the positivity in that song, ya know? Not often do you hear rappers saying how much they love their life. Usually it’s I love my car, or I love my women, but you’re talking about how you love your life.”

Brother Ali; “Well, I think they’re all parts of the same thing. What I’m saying is something really similar to what other rappers are saying, ya know, the symbols are different. For some people, their car is a symbol of them loving what they’ve achieved in their life, ya know what I mean. For me, it’s more about my family and things like that.

You know, you get one groups that comes from the desert, another groups that comes from the rainforest, the priorities are different because of what’s available to them. So people that come from the projects or the slum and they’re not supposed to ever be able to achieve a certain level of material success, which also translates to a certain level of freedom. That car is then a symbol of the obstacles they overcame. It’s not the actual car, it’s what it represents.

My situation is a little different than a Lil’ Wayne or a Jay-Z. I have the opportunity to speak about it a little differently, ya know what I mean? There’s a different way that you need to conduct yourself also when you come from that environment. You can’t be free and open and just jovial and happy because someone will rob you, literally. You need to put out an image where you’re celebrating but you also need to remind people that you’re not to be played around with. So it really has a lot more to do with the different circumstances we come from.

But I think a song like ‘Fresh Air’ isn’t that much different from some of the stuff the Kanye West does or Jay-Z or T.I. Ya know, it’s a really similar sentiment that you work hard to achieve these things that you want for yourself and you overcome your obstacles that are in your way, and then when you’re able to do that trough your hard work and diligence and patience, then you celebrate it.”

Chase: “Yeah, it’s a really positive message in all your lyrics and I can understand why a fan called you a ‘Street Preacher’ and why that was the working title of your album for a long time but the truth is, you don’t really preach.”

Brother Ali: “Not in sense that people understand the word now. The true sense of preaching means that you’re so touched and inspired and appreciative by some truth or some message that’s helped you, that you want to share it with the world. That’s what true preaching is. Preaching has come to take on a negative connotation because now we have so many examples of preachers who are hypocrites or preachers that are doing it for selfish reasons. Now that’s what preaching has come to be known as, and it’s unfortunate. True preaching is what I was talking about.”

Chase: “Nice, because some rappers want to be all positive and they come off as ‘too preachy’ and some people say, ‘I don’t wanna listen to him, ‘he’s too preachy.’”

I’m not saying I’m 100% pure myself. But that’s why I make songs also that are about the negative side of me. That’s what I do to keep myself honest. Songs like “Bad motherf*cker Part 2.” Every one of my albums has them; “Talking my sh*t,” “Pedigree,” Champion has the first ‘Bad motherf*cker.’ Shadows on the Sun album has songs like ‘Bitchslap.’ all of my projects have one song where I’m honest about that part of myself so that I’m being completely real.”

Well, that ends Part 1 of the Brother Ali interview. Please come back tomorrow to read Part 2 of the transcript or go and download the podcast right now to listen to the rest of it. Thanks for tuning in. See you tomorrow!

Word is Bond Remembers Malik B