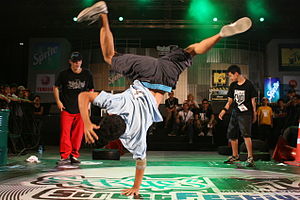 Afrika Bambaataa is one of the pioneers of breakdancing. He saw dancing as a way for young people to get together and accomplish something positive. To that end, he started one of the first breakdancing crews, The Zulu Kings. Soon after that, crews started to pop up everywhere. Breakdancing battles saw these crews competing against each other with dance.

At this point, breakdancing still focused on fast, intricate foot movements. In some ways, the early breakdancing was a little more difficult than the aerial moves and gymnastics that we see today.
It’s important to remember that hip-hop started with the DJ. The DJ played records for people to dance to. Dancing was the impetus behind everything. That is a fact that is often overlooked or forgotten.
Breakdancing was huge before rap music. It started in the 1960s. Hip-hop as a culture, however, didn’t solidify until the 1970s, and the first rap song wasn’t even recorded until 1979. In the 1980s, there were a whole slew of movies dedicated to this element of hip-hop, which only made breakdancing all the more popular.
Breakdancing waned in popularity over the years but it never really went away. In fact, it’s seeing a bit of resurgence in popularity now. Shows like America’s Best Dance Crew and So You Think You Can Dance have a lot of breaking in them.
It was really cool to see a breakdancing competition at the North by Northeast showcase last year. When I was at the Shad concert, people cleared a section of the floor to breakdance as well. I have seen this happen time and time again at concerts over the years.
I have an appreciation for people who can dance. I know I sure can’t. I don’t know how these breakdancers can do all of these aerial maneuvers and stalls. It simply is breathtaking to see them spin around on all parts of their bodies, hold themselves up with only one hand, and do all these different moves.
I wondered what made a good breakdancing song so I Googled it. I found a whole slew of suggestions. I wanted to play one I knew from experience though. I have heard this particular song at pretty much every breakdancing event I have ever attended. It lends itself to breakdancing perfectly, and appropriately enough, it’s from Afrika Bambaataa and The Soulsonic Force. It’s called “Looking for the Perfect Beat.”
So, if you have a lick of talent, if you have some clear space wherever you’re at right now, see what you can do. Break out some moves.
Have you noticed how long these songs are? We’re accustomed to hearing songs nowadays that are three minutes in length. Breakdancing songs can be five, seven, or even nine minutes long. I guess it just gave people extra time to dance because that is what it is all about.
Breakdancing can be done to any song. It doesn’t have to be a rap song. It just has to have a high tempo and a nice feel to encourage dancing.
There are about five specific moves and they aren’t always referred to as such, but here they are;

Top Rock – you are moving from a standing position, usually the start of a routine.

Freezes – stylish poses where the dancer holds a position. It usually requires a lot of upper body strength.

Drops – like a freeze but the dancer flops down and appears to slam into the ground hard. These remind me of pratfalls that the old comedians used to do. It looks like it hurts but it’s part of the routine. The dancers always get up and smile and it’s pretty amazing to see.

We can’t do a show about breakdancing without mentioning the Rock Steady Crew. They formed in 1977 and they really took it to new heights. The head spins and windmills and aerial maneuvers became popular because of what this crew was able to do with them.
Hip-hop as a culture is based around DJs and dancing. That is very important to remember. It’s not just about the rappers or the MCs. There are four elements of hip-hop. We really need to pay attention to all four elements; DJing, MCing, Graffiti Art, and Breakdancing.
That’s why it is important to honour and pay tribute to the innovators of breakdancing. We need to remember the contributions of  James Brown, Afrika Bambaataa, and The Rock Steady Crew. Without them, we might not have hip-hop or at the very least the great dancing that we see at concerts, in clubs, and at competitions.
Thanks for tuning in. This is Chase March and now you Know Your History!

Download this show for free or stream it with the player below.