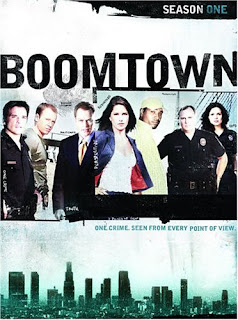 I can’t believe that this show almost completely slipped by my radar. It is amazing and one of the best shows I’ve seen in a long time. Unfortunately, it got cancelled five years ago.

I had never heard of it before. I saw it in the 2 for $10 bin at the grocery store. I picked it up and was intrigued by it. “One crime. Different points of view. Until you’ve seen them all, you won’t know the truth.”

I flipped over the case a few times and thought, “for five bucks I can’t really go wrong, especially considering that I’m getting 18 hours of television.”

I started watching the show and was really blown away by it. The storytelling was absolutely phenomenal. The pilot episode had a beautiful book-ended opening and closing. It was poetic, and perfect television. I don’t say that very often.

The show focuses around seven characters. There are two detectives, two uniform officers, a paramedic, the district attorney, and a reporter. Not only do we get to see the stories from their perspectives, we sometimes also get to see scenes from the victim, witness, or perpetrator’s point of view as well.

The technique of jumping to different points of view isn’t just a gimmick. It is used to reveal character or to further the plot. It allows for mystery and suspense. It also is very realistic because we don’t get to see the entire story in real life either. We see it from a specific perspective.

It’s a shame that this show didn’t grow to become a hit. It’s theatrical and really gives us something new. It isn’t your typical cop show. I’m glad that I own it on DVD now. It really is one of my favourite shows of all-time. And to think, if I hadn’t of found it in the cheap bin, I wouldn’t even of known of its existence.

There was a second season but it was only six episodes long and it doesn’t like it will be released on DVD. I hope I can find those episodes one day because I would really love to see more.