I went into Chapters last week with my brother. We sat down in coffee shop and caught up. We haven’t had the chance to hang out, just us guys in a while. It was nice.

He bought me a hot chocolate but when I got the thing I didn’t even know how to drink it. I felt a little uncultured. Hot chocolate to me is usually just a cup with some liquid in it. This cup didn’t even look like hot chocolate. The weirdest thing was that I just got the regular one. They had a deluxe – something or other – special kind, as well.

I’m a Plain Jane kind of guy. Is there a male equivalent of this saying? I don’t think there is. Anyway, so I got this fancy beverage that didn’t sound like it would be such an event from the menu board. 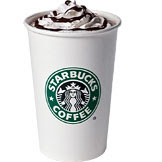 The hot chocolate came with about a two and a half inches of cream on top and that was covered with chocolate syrup.
I couldn’t figure out how to drink this thing. I tipped the cup several times and only ever got some of the cream. It took me quite a few “sips” before I ever got to the beverage.

It was a good drink though. After that, my brother and I hit the magazine rack. I don’t often buy magazines any more but I picked up two; the latest Writer’s Digest and The Writer. I like these publications.

We walked around the store for a bit just browsing. I wasn’t planning on buying anything else. We were on our way out of the store when a book jumped out at me. The title called me. It sounded an awful lot like the book I’ve been wanting to write for about twelve years now.

I flipped through the book. I told my brother that this looks exactly like my thesis. We’ve talked about this book I’ve wanted to write lots of times. He told me that he didn’t think it was exactly the same. Yet as I flipped through it, I couldn’t shake the feeling that it was. So I bought it.

The title is very similar to the working title I had for this project as well. I’ve been researching this now for a while. I so wanted to write this book.

Has this ever happened to you before?

The Book I Wanted to Write

5 thoughts on “The Book I Wanted to Write”