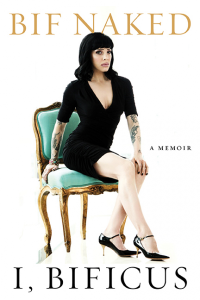 I, Bificus – A Memoir by Bif Naked

I am a huge Bif Naked fan. I have been for a while. She is an amazing performer and a great songwriter, so when I heard she had written a memoir, I knew that I had to read it.

I was hoping I could find out how she got her name. A few chapters in, I thought it had it figured out.

I felt it was my duty to torture Kenny, and it was never long before I took all my clothes off and ran naked, yelling “Chase me!” and waving my arms madly.

She was a young child at the time of that incident and apparently, it wasn’t the impetus for the name. She earned that because of a flyer promotion. At the time, she had already had the nickname of “Bif.”

Few punk bands had female vocalists then. The concern was that switching to a female vocalist would be looked down upon by the male punk rockers, especially in Winnipeg. The guys in Gorilla Gorilla decided to go out large, making gig posters to advertise the upcoming show that read”Come see Bif Naked.” It was a double entendre that basically  baited the naysayers-peers, friends, and fans still disappointed about the previous singer’s departure – to come to the show, even if only out of curiosity to see if I really would be naked. The band plastered the posters all over the city, putting them on practically every street lamp post and mailbox, even gluing them on store windows. It was a massive street-level postering campaign, and it worked.

I mentioned Bif Naked in my Grade 3 classroom a few years back and my students laughed. I told Bif about this via Twitter. 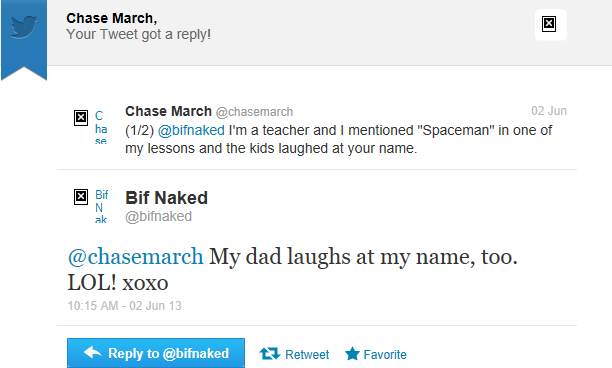 I saved that tweet notice in my email for the past four years because it was a memorable exchange from one of my favourite musicians. We tweeted a few more times since then too. (I just wish the logos still loaded properly in my email for this first message)

Part of me didn’t want to know all of the things I learned about Bif Naked in this book. I had to cringe a few times. I didn’t want to see her go through some of what she had to do. I didn’t like to see that she made some stupid choices when she was young. I wanted her to just be a sweet girl who grew into a great poet, musician, and songwriter. I guess she had to go through all of that stuff to become who she was.

I maintain that everything happens for a reason. This theory drove my dad crazy-he believed it was just a way to frame stuff and justify it. He said I am a “great justifier” and a “shamelss predestinist,” and that holding this theory enable me to find a reason for anything.

Maybe it’s best not to meet your heroes. Maybe just listening to the music and tweeting is enough.

If you are a super-fan, and want to learn more, check it out. Or buy a copy to support her if you have never seen her live or own all her albums. And then keep it on the shelf. Either way, let’s celebrate Bif Naked.

My List of 2017 Reads – continually updated all year long

Objectivity and Feedback for Writers – The Ultimate Checklist