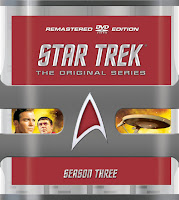 About a month ago, I found the remastered DVD box set of Season 3 of the original series of Star Trek.

I frantically searched through the clearance bin hoping to find the other two seasons. I would so love to own the entire series of the original, and still the best, Star Trek series.

Unfortunately, there only seemed to be one copy of the DVD in the entire store. I went to another branch of the store hoping to find it there but came up empty as well.

My dad is a huge Star Trek fan, and like me, doesn’t have cable television. I knew he’d really appreciate having all 24 episodes of Season 3 on DVD so I gave it to him as a Christmas present today.

We already watched a few episodes together and were simply blown away by them. This remastered collection is breathtaking. The colours are so sharp and vivid that you’d have no idea the show was shot about forty years ago. The special effects have also been brilliantly updated. The old phaser beams used to just show a green blob of light, now you can see the beam shoot out.

The new effects mesh perfectly into the show and don’t take away from the viewing experience either. I so love what they have done here.

The next time I go over to my dad’s, I’m sure he’ll have watched this season full over four or five times. He will probably beat me next time we play this… 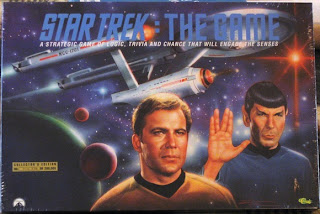 Star Trek: The Game is a limited edition board game that combines strategy, trivia, and skill. My dad and I like to play it but our memories of the episodes are a bit fuzzy. Since we don’t have cable, we haven’t seen the old episodes in a while.

Next time we play, he will probably kick my butt on any Season 3 questions. So far, we’ve been pretty evenly matched.

Oh well, I know it was a great present and I know he’ll get lots of use out of it. Hopefully I’ll find another cheap copy of the DVDs somewhere. Maybe I can even find the other two seasons to buy him for a birthday present next year. To have the complete series would be so cool.