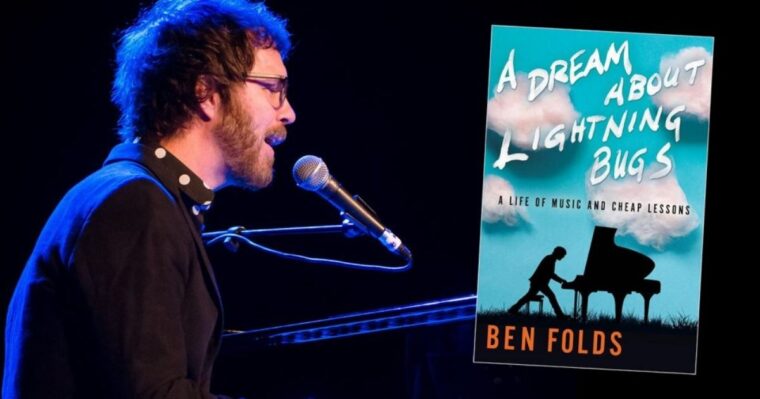 A Dream About Lightning Bugs: A Life of Music and Cheap Lessons by Ben Folds

I love when audio books are actually narrated by the author and when it is a musician, who plays some keys throughout, it’s really cool.

I like to take notes when I read. It’s a little harder to do that with an audio book, but I bookmarked a few key passages and then typed out what I heard.

Ben Folds talks a bit about music education and how most of us learn by copying. We play music written by other people and many of us never get out of that stage. However, Folds thinks music education should include more creation. He says . . .

“If you’ve really got something to say, and all of us do, you will want to learn the vocabulary. You will frustrated and motivated to learn the technique. So why not teach and encourage a little of both, copying and creating?”

When improvising he believes that “we’re always following something, something simple, a line and some clues. We don’t have to know where it might lead.” And of course, that’s the fun of it. Folds even composes live on stage. I’ve never seen that done outside of hip-hop.

He also has cool things to say about new music. Many of us think that artists aren’t being fresh and original. Folds play devil’s advocate and says . . .

“To diminish the new as nothing more than a rehash is a mistake. I’m reminded of Gertrude Stein’s belief that ‘There is no such thing as repetition, only insistence.’ Meaning you can do or say something a second and third time but it will not be the same experience because the first occurrence, utterance, or expression of an idea has now altered the environment. So you can’t repeat, not literally, but you can insist.”

Another cool story he tells is about how he played a variety of gigs as a dinner musician. He would recycle a limited number of tunes and cash in his check. But someone called him out on it one day and it changed everything. They told him his insincerity was a mood-crashed for everyone.

They thought “the knock-on effect of this sort of insincerity was at the heart of the world’s problems.”

As Ben relates, “They were there to teach me to appreciate the power that I was wielding because I had an usually strong aura and charisma. . . Charisma carries with it responsibility. They suggested that when I performed, I should always be present, kind, and engaged. They implored me to always remember that the intention with which you play each note has an effect on the people listening. An audience’s time, presence, and attention are great gifts to a performer.”

The cheap lesson here – Be Present!

“It’s harder, it’s riskier to be present, but we should try like hell to be and not just in music, but in every action and exchange in our short lives.”

Ben Folds even talked about covering rap songs. I will be sharing that on my radio show soon. Overall, this book was a good listen and a fun ride. I took a few more notes about songwriting and the art of freestyling. They might warrant their own post someday too. Stay tuned!

This is an Avenger’s World. It is Protected!