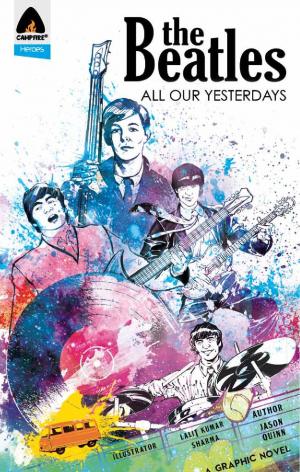 I love The Beatles. What they did for music cannot be understated. They changed the game with their style, sound, and look. Their music still permeates today fifty years after their groundbreaking album, Sgt. Pepper’s Lonely Hearts Club Band. To help celebrate that milestone, Campfire Comics has released a graphic novel that tells the story of the early days of the band.

The creators of this book recreated images from videos and photos to tell the origin story of the band we all know and love. For people who are not Beatles scholars, this book is illuminating. I did not know that they had a few names before their iconic music pun. I also didn’t know that there were five of them. Both John and Paul played guitar. There was a bass player in their ranks for quite some time before Paul McCartney decided to fill that part of the band himself.  These boys also got up to some shenanigans and trouble in their early days.

The story starts very early on with each of the main members of the band falling in love with rock music as children. It then goes on to show how the band went through different configurations, styles, and outfits before they figured out who they really were as a band.

The art is very well done and captures the youth, imagination, and recklessness that teenage musicians go through. Not much is different today. The graphic novels ends with the release of their first single that was released on Friday October 5, 1962. As as the narration box indicates

“And the hits soon kept coming. The Beatles had arrived., Beatlemania was about to sweep the world and music would never be the same again.”

It would be interesting to read their continuing adventure. I know there are more stories that could be told. Comics are a great medium for this kind of storytelling. It’s the first music origin story I have read in this format, but something tells me it won’t be the last.

This book also comes with a great bookmark in the shape of a guitar. It makes me wish I hadn’t borrowed this one from the library so I could keep it.