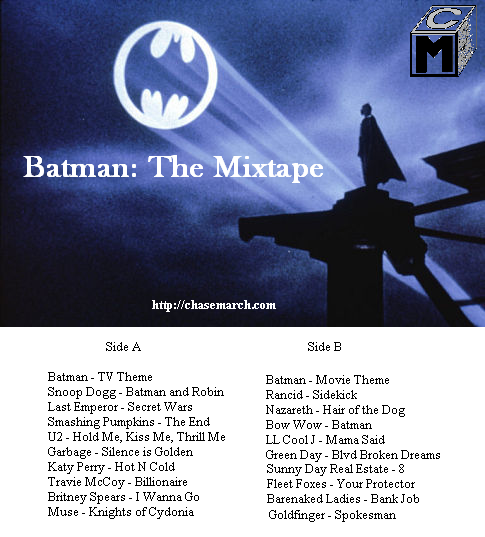 Batman deserves a mixtape, doesn’t he? After all he does to protect the city from crime, the least we could do is honour him with a mixed CD.

The tape starts out with the theme from the television series and then moves in to Snoop Dogg’s “Batman and Robin.” The song blends into The Last Emperor’s brilliant take on rappers battling super-heroes and villians in “Secret Wars.” We then have two songs from the soundtracks of Batman films.

Katy Perry’s “Hot N Cold” seems to fit with the persona of Bruce Wayne and how he has to hide certain aspects of his life to protect his secret identity. The next song totally fits with the theme since Bruce Wayne is a Billionaire.

Side B starts off with a track from Robin’s point of view. It’s a pretty interesting take on being a “Sidekick.” And when Nazareth sings, “Now you’re messing with a song of a b*tch,” they could definitely be taking about Batman. I certainly wouldn’t want to have to go against him in battle.

I originally made this tape as a birthday present for my brother. He’s a huge Batman fan and owns hundreds of the comics.

I hope you enjoy this mix. It can easily fit on to one CD or you can download the mix to play on your iPod or MP3 players. All of the songs blend into each other but they are on their own track so you can skip through songs at your leisure or listen to the mix straight through.

Submit Your Tracks for The MIX(ed)TAPE 2